Miners of Chile and around the world 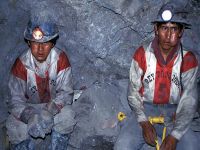 A few days ago the whole world followed with deep emotion the rescue of 33 Chilean miners who almost lost their lives trying to extract minerals hundreds of meters under the ground.

While humanity still celebrated with pomp and circumstance, the miraculous operation that took from the jaws of death our 33, I read in a Chilean newspaper that Roberto Benitez died. This is another miner - a youth of 26 years. He was crushed by a rock in another mine in Chile, over a thousand meters below the surface.

About the same time four other miners were victims of an accident in Ecuador - they were trapped under the earth, 150 meters from the surface while working.

In Colombia, also on those days, four miners who died were being mourned that worked in a gallery 60 meters underground. The bodies of two of them were rescued - even there the same way. The name of the place that became their tomb is "La Esperanza."

A few hours later, across the world, a gas explosion at a coal mine in China trapped another 276 miners, 239 of them managed to escape and reach the surface, but 37 others were not so lucky. In that same country a few months ago, 115 miners were trapped in a mine, having just been rescued after one week. Some of them were eating coal, in a desperate search for survival.

Faced with so many frequent accidents, I decided to research the matter a little more. I noted, shocked, that for each one of the 33 Chilean miners rescued, about 400 others will die this year. It is estimated that 12,000 miners die each year in the dark and unhealthy galleries of mines. All this while humanity is so proud of their technology to the point of wanting to go to Mars - there they are wanting to open another hole there.

Still distressed and overwhelmed before this litany of woes, I read some time ago about an international pact to improve mining safety on this planet - and behold, until yesterday, if I am not mistaken, only 24 countries have signed it. As a matter of fact, I note for the record that Chile was not one of them.

Meanwhile, Carlos Bugueno, one of the 33 rescued Chilean miners returned home - to a wooden shack he shares with 16 other relatives. He was joyously received by all with a party - as they lacked money to buy air balloons, they filled plastic trash bags with air. Carlos Mamani, his colleague, also returned home - another wooden shack, which even has running water. Pretty soon they'll both be back in these murderous holes that mankind has dubbed as "mines" - after all, one has to make a living, even at the risk of losing it.

That's how the most precious minerals are plucked from the bowels of the planet at the cost of the blood of so many people like us. They are being sold most often dirt cheap to sustain what they proudly call a "market economy." To anyone who doubts my words, I suggest you compare the price of a tonne of ore with a single bar of Swiss chocolate, or a barrel of oil with a liter of Scotish whiskey. A scandal it is, this "market economy."

Perhaps, with these portals of the twenty-first century, in our so greatly advanced civilization, the miracle of a single planet that we have, we should meditate on the words of the Marquis de Maricá: "Slavery demeans the slave and barbarizes man."

Pedro Valls Feu Rosa is the Chief Judge of the Brazilian Judiciary, Chairman of the Electoral Tribunal of the State of Espirito Santo, Brazil.