In Brazil, instead of providing security against theft for banks, military police trying to break into ATMs 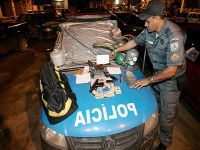 Two soldiers from the Military Police of Rio de Janeiro (PMRJ) were arrested, caught in the act, accused of participating in an attempted burglary at ATMs of Banco Itau in Vilar dos Teles, São John Meriti, in the Baixada Fluminense, in Rio de Janeiro, but nothing was stolen.

The two policemen were identified as PMRJ soldiers Monken Haller, 27, and Rafael Cordeiro Nascimento, 28, and are stationed with the 13th Battalion, located at Praça Tiradentes, in Rio de Janeiro.

According to police, one of the soldiers arrested monitored the frequency of radio communication of the 21st Battalion located in Sao Joao de Meriti, in the Baixada Fluminense, and would have offered a £5000 bribe to the police unit.

According to the police, one of those arrested used their own battalion PMRJ radio communication frequency of the area to monitor the movement of vehicles and streamline the attempted burglary of bank ATMs. This same police officer was accused by colleagues of offering them a bribe of R$5 thousand to avoid prison after having been caught in the act.

Police of the 21st Battalion report that the soldiers Haller Monken and Rafael Cordeiro Nascimento gave coverage outside of Banco Itau - armed and in civilian clothes in private cars - to the refrigeration mechanic Alexander Laskosky, 36, who was inside the bank cutting the three ATM machines.

Corporal Lessa informs that the Military police, around 1h20m, were on patrol on Jacatirão street at the Centre for Vilar dos Teles, Rio de Janeiro, where police became wary of movement and smoke within the interior of the agency Banco Itau, and the presence of a black Peugeot with a plate LOG-4578 parked at the door. Approached while inside the vehicle, the soldier identified himself as Haller Monken.

With the soldier Haller Monken, police found a mobile communication radio used only by military police. The device is only used for communication service in the frequency of the battalion's area.

The mobile communication radio was found with the soldier Monken Haller, police said. It was tuned in the range of the 21st Battalion, in charge of the area, used only by the Military police. Police believe he was monitoring the movement of vehicles and events in progress to ensure that the group was not surprised.

The soldier, Haller Monken, confessed his involvement in the crime and attempting to bribe the officers who approached him, offering £5,000 to get released, said Second Lieutenant Jean Silva Santos.

The mechanic Alexander was arrested as he left the branch of Banco Itau, where they found a crowbar, a torch, a gas canister and pliers.

A few meters away from the place, the soldier Rafael Cordeiro Nascimento was also arrested in a silver Honda Civic, plate LQV-1887. Rafael denied involvement in the crime and said he had gone out to lunch and would then go to his girlfriend's house.

The policemen who carried out the arrests also said that a white Gol vehicle was seen near the bank, but they failed to address the driver, and believe that the vehicle was also there to provide coverage of criminal activities within the branch of Banco Itau. A 9mm pistol, a .38 caliber revolver and two mobile phones were seized from the two vehicles.

Prior to the occurrence that resulted in the arrest of the military police Haller Monken and Rafael Cordeiro Nascimento, two other PMRJ soldiers, Renato Luiz Vieira de Farias and Geandre Minervino, both 28, were arrested in Itaboraí, Metropolitan Region of Rio de Janeiro, for involvement with a car theft gang.

The first soldier's cousin, Renato Vieira, and Cleber Luiz de Farias, 30, were also arrested. With the three were found three pistols and an unmarked revolver. In Precinct 71, Itaborai, Renato was recognized by a couple who recorded the theft of an EcoSport, hours earlier, in Magé, in the Baixada Fluminense.