Legal action, politics and a popular end to the impunity of Israel 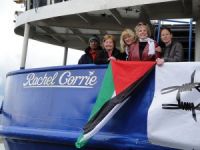 The Coalition for the Freedom Flotilla met at the home of the Geneva Convention to welcome the Swiss initiative in the Coalition, and to discuss the different levels of our ongoing efforts to break the illegal siege on Gaza by Israel. The Geneva Conventions and agreements adopted by the world community to protect life and human dignity are being violated daily by Israel with impunity.

As members of civil society, we are working to end the impunity that has the quiet silence of our governments. Many of our countries abstained from voting on the findings of the investigation of the UN Human Rights Council that Israel was guilty and their actions were described as "incredible violence" and "grave breaches" of international law, thus supporting legal action against Israel for "willful killing" and "torture."

The United States vetoed this report that found that one of its citizens was "executed" by Israeli forces. We refuse to accept this. We represent the voice of condemnation, more and more numerous around the world for the continuing crimes of Israel. We are working in the political, legal and popular areas to make Israel accountable for its crimes.

On October 14th, we will be in The Hague to submit our complaint to the Prosecutor of the International Criminal Court. In less than two weeks, lawyers from more than 20 countries will meet to discuss the claims against Israel and the ongoing efforts to prosecute Israeli war criminals. And yes, we are also planning to sail again.

If we do not stop Israel, the kidnappings, arrests, demolitions, mutilations and murder of Palestinians will continue, and they will use similar violence against those who protest these policies. With all pride, Israeli leaders have announced they will use snipers and attack dogs against unarmed civilians on future fleets. Despite these threats, which have no deterrent effect, the flotilla continues to grow. Today, eight new countries have joined our coalition: Switzerland, Italy, Netherlands, Malaysia, Ireland, Spain, Norway and the United States, with each one of them working on sending their own boat to Gaza. Our fleet will sail again and this time not only have more people, more boats and more participating countries, but also in the spring of 2011, we will be sailing from three continents - Europe, Asia and Africa.

We appeal to our countries to use all political and legal means to ensure that Israel ceases to operate above the law, that we do not have to put our lives at risk to stop them.