Rescue for miners: The world's eyes on Chile 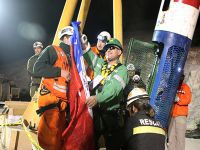 Chile has been the focus of the attention of the world, while advancing their stunning rescue operation for trapped miners since August 5 to over 600 feet deep.

At dawn on Wednesday, a dozen workers had already left the area, lifted from the bottom of the mine by a special capsule 60 cm in diameter.

Live images showed the international public at 00:10 (local time) the rescue of Florencio Avalos Silva, the first to leave the hole where he had to survive, along with his colleagues, subjected to high temperatures and severe humidity conditions.

According to the last minute bulletin of the Minister of Health, Jaime Mañalich, "the time for the task goes better than expected." Specialist Michael Fort set at approximately 50 minutes the time it would take between bringing up each worker.

One case that has generated most concern was the miner Mario Gomez, the ninth to be rescued, that required the use of bronchodilators in his displacement, given his fragile state of health.

Once on land, the workers were taken to the regional hospital in the northern city of Copiapo, the closest to the San Jose mine, located in the Atacama Desert.

For the coach of Chilean football, Marcelo Bielsa, Chile's passion for this sport at these times is sent entirely in the background.

"I admire the strength of those who are down there and are hoping to be brought up," said Rosario, alluding to an unprecedented rescue operation.

"Football is now a background and all of us are committed to the fate of the miners," he remarked.  At last count, 26 of the miners have been brought up.