Sukhoi's three engineers kill themselves with industrial alcohol in Indonesia 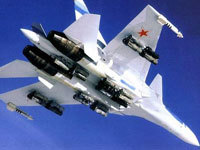 Three employees of Russia's legendary Sukhoi aircraft maker died in Indonesia at Sultan Hasanuddin airbase. The three men were working in the country providing technical servicing for the fighter jets, which Indonesia had purchased from Russia.

The bodies of the three men were found in the morning of September 13th in their hotel rooms, RIA Novosti reports. One of the engineers, Viktor Safonov, died at hospital, The Jakarta Globe reported. Forensic experts originally believed that the three men died as a result of heart attacks.

Agus Sapriyatna, the commander of the Indonesian airbase, told the local media that the body of Alexander Poltorak had been found in his hotel room, under the bed.

Two teams of Russian specialists - three pilots and 37 engineers - arrived at the above-mentioned airbase in Indonesia from Russia's Komsomolsk-on-Amur. The specialists supervise their Indonesian colleagues in mastering the exploitation of three Su-27SKM and three Su-30MK2 fighter jets, which Indonesia had purchased from Russia.

The first three jets were delivered to Indonesia in December of 2008. Two others arrived in the country last week. The sixth aircraft is said to be delivered until the end of September.

Forensic experts of the Indonesian police stated that pathologists had found traces of methanol, or industrial alcohol, in the blood of the men, RIA Novosti reports. The three men were highly experienced and qualified specialists; all of them were in their late forties, Vesti reports.

As soon as the news about the death of Russian specialists appeared, Indonesian newspapers said that the Russians had most likely poisoned themselves with surrogate alcohol. Anonymous sources at the Russian aviation industry said that it could be possible indeed, because such incidents had happened before.

Methanol is used in the production of formaldehyde and various ethers for the chemical industry. Industrial alcohol is strong poison, which affects the nervous and the cardiovascular system of the body.

Taking 5-10 milliliters of methanol results in severe poisoning. A dose of 30 milliliters and more leads to death. The traces of methanol, which were found in the blood and internal organs of the three Russian engineers, testified to the fact that the men had taken a lethal dose of the substance.

The Russians died of respiratory failure, which appeared as a result of methanol poisoning, Indonesian forensic experts concluded.

JSC Sukhoi is Russia's largest aviation holding employing over 29,000 people, the website of the company says. The holding consists of Russia's leading design bureaus and aircraft-making plants. The company conducts a full cycle of works in the production of aircraft - from projecting works to efficient post-sale servicing.

Sukhoi's aircraft, known under the trademark "Su" incorporate state-of-the-art aviation technology on the world market of arms and form the basis of both the Russian front-line aviation and the tactical aviation of many countries in the world.