So Hillary - Who Are The Terrorists?

So Hillary - Who are the terrorists? 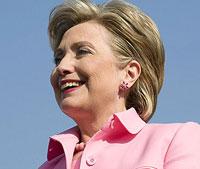 So Hillary - Who Are The Terrorists?

What are the penalties she will ask from the UN?

The Israeli attack on the ships with humanitarian aid to Gaza is one of the greatest acts of cowardice among the many perpetrated by Israel against the Palestinian people. The whole world rose up - the shock was so general as was the proper language and displays of anger and indignation. Immediately an extraordinary meeting of the Security Council of the United Nations was called to discuss the Israeli military operation. The representative of Brazil to the UN supported the calling of this extraordinary meeting on the position of the Brazilian government. [1]

What in diplomatic language is called a military operation, the attack in language and evaluation of the average person cannot be seen merely as an act of terrorism, an act like so many others perpetrated by Israel. It was a terrorist act of piracy and murder, but needless to say that even pirates operate with greater discernment than what was demonstrated by Israel.

For me also there are some aspects which I find an appropriate response. In my opinion only drunk or crazy kids would have the idea of going down one by one, falling from the sky in the night before a crowd that would not be expected to receive them with gratitude and affection. How to explain the Israeli military coming down one by one in the middle of the night the way they did?

As everyone by now must be aware, Israel has an intelligence that at least ought to understand that down there would be hundreds of men with every reason in the world to hate them and yet they still decided to go falling one by one, slowly with the result of nineteen dead. They don't have the ability to plan any better than that? To me that smacks of military infiltration, acting aggressively in a mostly passive crowd, to justify the use of force, which in this case resulted in nineteen deaths. Many strange things need to be explained.

Things to be explained. Certainly. Brazil in its official position believes that [in diplomatic language], the incident must be subject to an independent investigation. There is also an international requirement for an independent inquiry about the military attack on a civilian humanitarian aid ship - the sustained demand from China, Russia and France. However, this demand for an international independent investigation seems to be challenged by Israeli and American voices, arguing that Israel has the capacity to conduct their own investigation into the matter, and it is understood that the international community should be satisfied with that. It is criminal to presume to act as judge, lawyer and prosecutor at the same time.

In the above mentioned extraordinary meeting of the UN Security Council, despite many official voices, such as Turkey, a specific concrete position was demanded, very clearly spelled out in a clear and concise text, to require a total opening of the borders in the Gaza sector. At the end of thirteen hours of arguments, what was achieved was a very watery declaratory text that, because of its ambiguity can be understood in many ways by whoever is examining it.

Therefore, and please pay close attention and just keep this in mind when all else vanishes and mixes. At the conclusion of this study, after examining and studying the situation from every angle imaginable, I came to understand deep down that there's only one realistic exit - short term - for the miserable situation we find ourselves in today.

It is of paramount importance to achieve a change in the veto system used in the UN Security Council. Without this change, we will never be able to put an end to acts of terror committed by Israel or the criminal advances of the U.S., these criminals are on the move to achieve their economic goals and nothing more.

It was a structure anyway already that did what it had to do. The structure of the UN Security Council was appropriate for the time after the war - from 1945. Today this structure is obsolete and wrong and does not correspond at all to current reality. It has only been good for allowing gruesome and unjustifiable wars for the sake of the few and the misery for many, as well as to prevent the international community to act appropriately against rogue criminal states.

What happened to "Freedom Flotilla" at least taught us that lesson. The UN Security Council must be reformed and that must be done now. In the meantime, one or another approach can be taken, but it is the very structure itself of international work that has to be readjusted to accommodate current reality.

Since it is clear, then I would present some factors that seem of interest in international news after the events of yesterday and today.

One cannot but agree that the European Union-EU, as it stands today, is an imperialistic structure. [2]

It is a force to reckon with, if it intends to achieve immediate relief of the plight of Palestinians in Gaza, because as we saw, the UN, for having the best intentions, is bound hand and foot because of the veto power of the United States. We are sure that this is a problem that will not be solved tomorrow. It seems to me that the European Union, through its ministry of foreign affairs is in a position to act in the here and now, creating the necessary pressure for the opening and lifting of the the inhuman blockade of Gaza. Let us support this effort and we can keep our critical attitude regarding the structure of the imperialistic European mainstream.

The siege of Gaza should be ceased and Hamas should be considered in a context of relations to be respected. It should also be questioned to what extent it makes sense to treat this organization as a terrorist organism.

In the official elections in 2006, Hamas as a political party won the elections in an indisputable way, winning most parliamentary positions in an election considered by European officials as fair and democratic. I still remember Bush on television giving the Palestinians the congratulations for the great victory achieved through democratic elections, which even his words were an example of Democratic Action to admire. Not more than two or three days went by and there appears Bush trying to reverse what he had said so spontaneously. For me it was clear who had been talking to an Israeli or other representative. From then on everything changed. Here we do not talk to terrorists and or give them prominence.

And what has followed all this?

The siege of Gaza and all other criminal acts culminating with the massacre that left more than 1400 dead in Gaza, mostly women and children against 14 Israeli soldiers dead.

My feeling of revulsion was not small yesterday, after the attack on the aid group to Gaza that I had to hear on television, explained by Israeli officials, who were claiming to be the only democracy in the region, and therefore they were due respect. I just barely managed not to cry with rage.

Ask yourself: what is the difference between terrorists and movements of armed resistance to an illegal military occupation? Why do the occupants see women and children as legitimate targets without running the risk of being criticized, on the contrary being supported, not only with words but with so many millions and billions of dollars they do not know how to count them, but those who resist this occupation army cannot do the same?

I say, while there is a margin for doubt, I am completely against killing innocent people for political or other reasons, such as illegitimate wars for economic gain when there is no capacity for economic planning to reach for it.

However, justice is done on the subject if everything is called by its proper name .. Terrorist is a terrorist and killing is killing. But you need to know who is who here and also why. Who is being butchered? Where is democracy? Who are the de-facto terrorists?

The missile defense system called "Iron Dome" built by Israel, has cost 200 million U.S. dollars for American taxpayers. This is above the $ 3,000,000,000 of annual military aid provided to Israel with American tax money, many of them taken from the workers themselves without social conditions that give them satisfaction. [3]

According to news from the BBC, during a period of approximately four years, Hezbollah attacked Israel with 4000 missiles while the Palestinian activists with a few thousand. What the BBC forgot to say was that at the same time Israel bombed the same 12,000 times. Adding to that the 2,500 "shells" (grenades -?) and four and a half million so-called "cluster bombs" that are bombs with a bunch of bomblets, each bomb dividing into many components.

Over the past seven years we had 14 Israelis killed and 5000 Palestinians according to "Jane's Defence Weekly."

So who are the terrorists and what penalties will be placed upon them?

I conclude this study by quoting Emir Sader who so well understood that the situation studied here [4]: - - "Who presents a danger to world peace? Iran or Israel? Those who perpetrate massacres after massacres against the defenseless Palestinian population? Those who prevent the UN from putting decisions into practice? Only Israel and USA are blocking the only route to political and peaceful solution to the region? "

So Hillary - Who are the terrorists? What are the penalties you will ask for at the UN?

[1] Brazil summons ambassador to Israel after attack on ships "in www.patrialatina.com.br