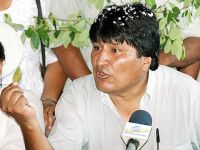 Earlier this month, President Evo Morales came to denounce the U.S. Agency for International Development (USAID) and accuse it of infiltrating social movements in order to provoke conflicts with the government and destabilize it. In addition, the president warned that those who persist in these activities will be expelled.

An impossible task for Morales. USAID will never be subdued. It is an entity that is part of the plan area for the exercise of U.S. imperialism in Latin America, Africa and Asia. It's part of the gear of an elaborate strategy for monopoly capital to cooperate in enhancing the interests of the empire.

This machinery was set up after World War II and is set up by USAID, the Alliance for Progress (CIAP), soon replaced by the Inter-American Foundation (IAF), the Bank of Imports and Exports (Eximbank), the Interamerican Development Bank (IDB) International Monetary Fund (IMF), International Bank for Reconstruction and Development or World Bank (WB), Organization for the Promotion of Investments in Latin America (Adela) and their other financial arms.

USAID began its activities under the government of Harry S. Truman in 1946 and has since distributed more than 200 billion dollars in military and economic "aid" to countries in which it exercises its dominance, protecting their own interests. How much does this body allocate for Bolivia? This is a fact that we should know.

USAID uses at least four types of programs. They are: Loans for Development Program, Technical Assistance Fund, the Emergency Support Program and Program for Military-Political support. The latter is part of a vast espionage and U.S. intervention apparatus.

The Programme for Political-Military Support is the reason for their existence, because it is designed to curb and destroy the revolutionary movements in Latin America. For them, it was a secretly prepared repressive handbook, revealed in Bolivia by the lost newspaper "Hoy" in its edition of November 23, 1978.

USAID works seamlessly between the agency and the government of the country where it operates and, indirectly, through business monopolies, following fixed economic and political goals. This body provides money for Yankee investors. They invest directly in order to achieve influence.

The request of moderation done by President Morales, will never be carried out, because USAID was organized for this: conspiring to overthrow revolutionary governments. They now have more help because President Barack Obama has just approved new programs for "secret war" and "special operations" at the worldwide level. Bolivia and Venezuela are in the crosshairs.

Obama is worse than Bush

An investigation published by the Washington Post notes that Barack Obama has just authorized the expansion of the secret war against radical groups, increasing the required budget.

According to the Post, special operations are carried out in 75 countries, with the assistance of 13,000 military troops and civilian experts in intelligence operations, psychological warfare, targeted killing, training missions, and other illegal actions.

The Venezuelan-American journalist, Eva Golinger, points out in a recent article, that the researcher Jeremy Scahill discovered that theadministration of Barack Obama has sent teams of elite special forces under the Joint Special Operations Command, to Iran, Georgia, Ukraine, and also to Bolivia, Paraguay, Ecuador and Peru.

Chancellor Choquehuanca negotiates the reopening of diplomatic relations with the United States. However, as can be seen, neither the Obama Government nor USAID modify their policies. In these circumstances, would it not be better to postpone the creation of a United States Embassy in Bolivia?

The U.S. plans to destabilize governments that exist in several places. They are already prepared. Washington only waits for the moment to activate them. Golinger's article refers to a top Pentagon military man who said that Obama is allowing many of the actions, strategies and operations that were not permitted during George W. Bush.

There will be plenty of surplus money to finance schemes and organs, such as "La Torre" in our country. Two years ago, they nearly toppled Morales with a blow at the time called a "civic-provincial coup," coordinated by the then Ambassador Philip Goldberg, appropriately expelled.

Obama just requested an increase of 5.7% for the budget of Special Operations 2011. He asked for $ 6.3 billion, plus U.S. $ 3.5 billion extra for the contingency clandestine operations. For 2011, the total defense budget reaches U.S. $ 872 billion, U.S. with $75 billion to the intelligence community. There is money to spare.

At the start of the year 2009, President Obama signed the "Doctrine of Irregular Warfare," prioritizing it over conventional warfare. In "irregular warfare," the battlefield has no limits, because the tactics and strategies are not traditional. Subversion and the use of special forces for clandestine operations are the main techniques to destabilize the adversary "inside out."

To accomplish these tasks, agencies like USAID, National Endowment for Democracy (NED) and Freedom House, will serve to channel money towards the actors who are promoted in Washington. The "civil society" and social movements are penetrated in countries where, supposedly, imperial interests may be affected.

Golinger says in the article that one source from U.S. special forces commented: "We no longer have to work in embassies and do not have to coordinate with the Department of State. We can operate wherever we want."

This year, Venezuela was at the point of being classified as a "terrorist state." However, Washington took it off the list so as not to harm the sale of oil to the United States. It is no wonder that complaints are arising over Bolivia in opposing sectors. Such accusations relate to an alleged increase in drug trafficking. The government also must take into account that these spokesmen of imperialism aim to promote a change in regime.

Protest war, do not kill Moors, goes the refrain. However, it is necessary to be prepared before actions are brought into effect by NGOs of USAID. Next year they will have more in their budget to bribe those who are always willing to sell themselves.