On June 25 Pyongyang demanded that the U.S. pays compensation in the amount of 65 trillion dollars for the “six decades of hostile policy against the People's Korea." The information was released by North Korean news agency KCNA. 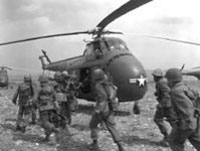 The statement issued by this agency says that this figure only approximately reflects the level of political, moral and cultural damage caused by a flagrant violation of the sovereignty and dignity of the DPRK, including through the illegal occupation of the southern part of the Korean Peninsula and the desire to prevent the unification of North and South.

In particular, North Korea accuses the U.S. of killing more than 1,230,000 civilians on its territory during the Korean War of 1950-1953. Pyongyang estimated the damage caused by killing, abduction and disappearance of its citizens (400,000 people) at 26.1 trillion dollars, while economic costs of the U.S. sanctions imposed in 1950 were estimated at 13.7 trillion. Losses from the "property damage" during the war of 1950-1953 were estimated at 16.7 trillion.

Moreover, Pyongyang drew particular attention to the fact that these calculations do not include the damage caused by the sanctions imposed by the Americans in 2006 (after nuclear tests).

The division of Korea into North and South occurred in 1945 after the defeat of Japan which occupied Korea at the end of the 19th century. In August-September of 1945, its northern part was occupied by the Soviet troops, which resulted in Communists rising to power in this part of the Korean Peninsula. Pro-American forces have settled in the south. The USA and the USSR signed an agreement regarding joint management of the country where the dividing line was drawn on the 38th parallel. However, this only postponed the time of the outbreak of the war on the peninsula. The war was caused by mutual attempts of Pyongyang and Seoul to bring the situation under control.

The U.S sided with South Korea (along with 18 other allies), while the USSR and China sided with the DPRK. The Korean War that began in 1950 has formally ended in 1953 with the signing of truce. However, Seoul and Pyongyang have never signed the Peace Treaty. There were clashes between them from time to time, most frequently in the Yellow Sea.

Sometimes there were clashes with the Americans, for example, in 1968 when North Korean Special Forces have seized "Pueblo" scout ship. Whatever the case may be, Pyongyang is “reminding” the US about past events by demanding 65 trillion dollars.

How feasible is this requirement? Vladimir Krustalyov, an expert at the Center for International Studies of the Maritime State University named after Admiral Nevelsky shared his thoughts with "Pravda.ru."

“First, when we talk about the events that took place at the Korean Peninsula in 1950 - 1953, we should bear in mind that the war continues, albeit it is in the "cold" phase now. Now this war is being conducted in the form of propaganda struggle.

Second, from a legal point of view, we cannot state that the U.S. was the aggressor at that time. They fought the Korean War under the UN flag as they received respective sanctions from this international organization in 1950.

And third, the amount of 65 trillion dollars is totally insane. The appearance of such claims to great powers has become very trendy. The United States (even if it wanted) would not be able to pay the amount claimed by Pyongyang. Incidentally, it is 3,000 times greater than DPRK’s GDP.

How did the North Koreans come up with this number? Apparently they took into account the loss of the so-called additional benefits in the spirit of "if it had not been for military devastation and subsequent sanctions, we would live very well now." I fully admit that the leadership of the DPRK does not expect to really get the money. It's just a propaganda campaign, continuation of the play, which we have seen in recent years.

The leaders of the DPRK have their special understanding of reality, which may seem very strange to the outsiders. The situation in North Korea is getting more aggravated. The economic crisis is accompanied by ideological crisis. The idea of "Juche" that was the cornerstone of the ideology of leadership in the DPRK has, in fact, failed. The country heavily depends on the resources received from outside (both in the form of imports and direct assistance). The U.S. and South Korea did not intend to follow the course and continue to take a tougher stance. As a result, the DPRK's economy in 2009 has already experienced some decline.

The situation requires significant and fantastically accurate changes that are hard to imagine, given the fact that the average age of the political elite of North Korea is 70 - 80 years old. And I do not see a possibility to transform the regime. Every day, northerners and southerners move away from each other increasingly more. You could even say that de facto there are two nations, the North Koreans and South Koreans.

“Recently, there are increasingly more talks about a possibility of a military scenario.”

“If before it was highly unlikely, it is now becoming increasingly more possible. I would like to note that in previous years, the parties have signed a great deal of amicable papers, including those regarding development of cooperation in several sectors. And now, both sides are terminating these agreements right before our eyes. This is not just a demonstration. The recent sinking of South Korean corvette "Cheonan,” in which Seoul accuses Pyongyang, has further aggravated the situation. The probability of a military scenario is now more likely considering these events.”

“What is a possible outcome of this new war?”

“The Vietnamese scenario where the Communist North takes the capitalist south is hardly possible. The forces are not equal for that. It is sufficient to say that the military budget of South Korea is ten times greater than that of North Korea. The DPRK’s military equipment quality is far worse than that of the Southerners. The most recent equipment dates to the 1970-1980s, and the amount of the "new" equipment is minimal.

In addition, the Americans will not be able to stay out of it. The US will automatically go into war with North Korea. There is mutual hostility between the countries. But North Korea is not "just an enemy," it is a nuclear enemy. It is hard to find an equivalent for this situation in recent history. Despite its probable military victory, Seoul will lose historically. The damage from the war will be accompanied by recovery costs. We are talking about 1-3 trillion dollars. They do not have them now, and will not have them after war even more so.