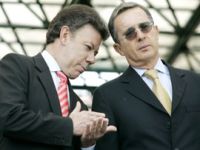 Victory of the former Defense Minister, Juan Manuel Santos, consolidates the current model in force in Colombia since 2002. More than 9 million Colombians voted for Santos, surpassing the 7.3 million voters who reelected current right-wing President Alvaro Uribe in 2006. Abstention was one of the highest in Colombian history, reaching 55.52% of the voters. "Santos will have to answer to the country about his role in the execution of 2,279 people during his tenure as defense minister," said an opposition representative.

Former Defense Minister, Juan Manuel Santos, was elected president, receiving the votes of only 30% of eligible voters. Abstentions surpassed the home of 55% in this country that has lived in internal war since 1964. Santos won 69.06% of the ballots cast on Sunday (20) in the second round of presidential elections. With this result, he consolidates the current model in Colombia since 2002. More than 9 million Colombians voted in Santos, exceeding the 7.3 million voters who reelected the current right-wing President, Alvaro Uribe, in 2006. "It is the" largest vote ever obtained by a candidate in our history. I receive it with humility and gratitude," Santos said in his victory speech.

"If we have come this far it is because we are sitting on the shoulders of giants." Santos also surpassed the total number of votes given to candidates officially in the first round, support that is supplemented with control or membership of more than 80% of parliamentarians, who have embraced his call for a "government of national unity." The result was already expected according to surveys. World Cup Soccer and the torrential rain raised the traditional abstentions to 55.52%, 50.76% higher than the index of the first round and the historical average of 52.17% recorded from 1958.

About 27.52% of voters backed the former mayor of Bogotá, Antanas Mockus (Green Party), who refused to negotiate politically with the left to join forces in the second round, proposing instead to build a "civic alliance." The volume of voters has increased slightly over 460,000 votes compared to 3,588,183 who won the first round in May. Mockus announced the independence of the PV in front of the new government: "We will support proposals that are considered good, after an exchange of ideas free from pressure," said Mockus, while acknowledging the government triumph.

The 1,329,512 votes (9.15%) obtained by the opposition Polo Democrático Alternativo (PDA), of the left in the first round, increased the rate of abstention on Sunday and to a lesser extent, the blank ballots, for those who maintained a policy of not voting for either candidate. The blank ballots were minimal, though they have more than doubled from 1.54% in the first round, to 3.41% in the second.

On Sunday there were record armed clashes with the balance of nine soldiers killed in the area of Norte de Santander, where there was fighting in the region of Catatumbo, on the border with Venezuela. The guerrillas promoted abstention and managed to reduce public transport in Caqueta, Putumayo and Nariño areas. In the South, there were attacks on the electricity grid and the Transandino pipeline. Referring to the biggest insurgent group, the Revolutionary Armed Forces of Colombia, Santos said: "I repeat that the time of FARC has been exhausted. Colombians know very well that I know how to fight them." The new vice president is former trade union leader Angelino Garzon, a former communist and former governor of Valle. "He is a champion of human rights and the defense of workers," defined Santos.

In May, seven human rights defenders and peasant leaders were killed. Four of them were demanding the return of lands occupied by ultra-right paramilitaries, accused of the gravest crimes in the last 20 years in Colombia. In addition, between May and the first week of June, over 100 farmers' organizations, trade unions, human rights, women's and black and indigenous movements received death threats .

In his speech, Santos did not mention neither the victims nor the paramilitaries, noted Ivan Cepeda, spokesman for the Movement of Victims of State Crimes (Movica). "There was not one word about peace, nor on the negotiated settlement of conflict in a line of continuity," he told IPS Cepeda, a parliamentarian from PDA. The call of Santos was "more for unanimity than for national unity," he added. "If the autonomy of the judiciary is to be respected, his proposal to annex the Attorney General's Office to the Executive Branch should be eliminated," warned Cepeda about the announcement by Santos.

This month, Uribe proposed expanding the military court that, by mandate of the Constitutional Court, has no jurisdiction to address violations of human rights. In line with Uribe, the president-elect proposes a reform of the judiciary. Cepeda said that this reform "cannot include limitations of achievements in the trial of human rights violators and those responsible for crimes against humanity, including those related to mass executions."

Santos will "have to answer to the country" about his role in the execution of 2,279 people allegedly by members of the police during his term as defense minister (2006-2009), a fact which is under judicial investigation, the Movice spokesman also pointed out. In recent days, intimidation against the Mothers of Soacha seeking justice for the murders of their children has stepped up, presented officially as guerrillas killed in combat while Santos was the head of the Ministry of Defence.