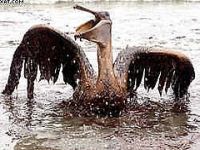 The almost infinite hemorrhage of gas and oil, that threatens to convert many countries into an oily and dirty sewer pipe, seems today the mythological Pandora's Box, since it can be a source of other ills to come.

Let's use the phrase "open a Pandora's box" when we mean that some of the acts done in life will bring new woes.

The story of Pandora and her famous box occurs in the context of the myth of Prometheus, who stole fire from the gods to deliver it to men, and Zeus decided to punish him for his offense.

Pandora opened the lid and from the container then flew innumerable evils seeds that spread throughout the Earth with lightning speed. Old age, sickness, tiredness, madness, addiction, passion, the plagues, sorrow, poverty, crime and all the ills of the world spread out across the land.

Hidden deep in the box was a single well: hope, but Pandora dropped the lid before it came out flying, closing it forever in the ark.

The company British Petroleum has scattered more than 400,000 gallons of hazardous and not investigated chemical dispersants and in the coming weeks that figure could double or triple according to Lamar McKay, President of BP America.

Dave Andrews, Ph.D. of the federal Ecological Group noted that many people are unaware what these dispersants can cause when used in large concentrated quantities.

What is certain is that these products will not cause the spill to disappear, but that, as explained by the journal, Nature, what they do in practice is to break up the current oil spill into smaller segments.

Its use involves making environmental concessions and is evidently a desperate and irresponsible act, explained Jane Lubchenco, manager of the Federal Oceanic and Atmospheric Administration.

The entire Gulf has now become a gigantic laboratory, simply because we cannot answer the question of whether the massive use of dispersants helps or creates greater evils, the alarmed New York Times published.

Dispersants used in the Gulf that didn't exist decades ago are the COREXIT EC9527 which arrived on the market in the 80s and COREXIT 9500, discovered in the 90s, both produced by NALCO.

The federal Environmental Protection Agency authorized up to the present the use of very limited amounts of dispersants, but has not yet given the green light for its massive use in this particular incident.

The producer himself is protected when they put a label there showing there were no toxicity studies on this chemical component.

Another piece of evidence worth noting is that the producer of the dispersants, the company NALCO, is owned by oil company Exxon Mobil and BP itself, according to Greenwire magazine.

But the transnational oil corporations have never invested the necessary money to investigate thoroughly these chemical agents, but now they will do so with the desperate contributions of taxpayers.

So all we know about the consequences that can be caused by these products is negligible and as obscure as the spots of water surrounding the spill.

If the previous hemorrhages serve as a guide, what is proven so far is that BP can only capture a small amount of the oil, while nature is put in charge of slowly dissipating a good part of it and the rest will be a bothersome nuisance for centuries.

It will penetrate the food chain and it is known that it can affect the immune systems and internal organs of marine animals, which has not been deeply studied by biologists. Poisoned animals cannot easily get food or defend themselves with their cunning predators, said Gail V. Irving, of the Geological Laboratory.

Ira Leifer, who works in the Technical Group of Flow, said the actual amount that is seeping into the Gulf has increased sustantially.

The arrogant representative of BP, Randy Prescott, made statements to the effect that Louisiana is not the only state that produces good shrimp, so perhaps it should be remembered that neither is BP the only company that provides oil and gas, which is why many customers can join in a boycott against it (editorial note: and only buy oil from Venezuela).