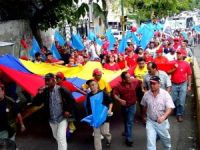 1. The current crisis led to the end of neoliberalism, North American hegemony and it will bring the end of capitalism.

- The biggest mistake of this view is to consider that a model or a hegemony or a social system ends without being overthrown and / or replaced by another. Neoliberalism is not over, if it is seasoned with degrees of state support.

2. You can and should "change the world without taking power".

- The project of deep transformation of society "for the base" unless it flows into the alteration of relations to empower has not led to any real process of transformation of Latin American society. Rather, social movements - like the Bolivians - who turned their strength into a social political force, are those who play the lead role in real processes of change in the world.

3. The nation state has become a conservative element.

- The progressive governments in Latin America are taking advantage of the state, as its purpose is to regulate the economy, to induce economic growth, to develop social policies - among other functions - while the neoliberal governments are those who disdain the state, turned their duties into a minimum and leave space open for the market. The processes of regional integration and alliances in the South of the world also has States as indispensable protagonists.

False claim. Progressive governments in Latin America rescued the role of politics and the state. Had they not done this, they could not have reacted the way they reacted to the crisis.

5. There are millions of "unemployable" in our societies.

- This statement, originally from Fernando Henrique Cardoso, who tried and sought justification for oligarchic rule, which has always ruled for only a part of society, excluding the poorest, now under the guise of a supposed "technological unemployment" that would forgo a large part of workers. The resumption of progressive governments combines economic development with constant elevation of formal employment and increasing the purchasing power of wages.

6. Social movements must remain autonomous in relation to politics.

- The social movements that followed this vision left the game for building alternative hegemonies, isolating themselves, if not disappearing from the political scene when it passed the stage of resistance to the construction of alternatives. On the other hand, movements such as the indigenous in Bolivia, formed a party - MAS - but they contested and elected their greatest leader president of the republic. In other countries, social movements participate in blocks of power of progressive governments, maintaining their autonomy, but directly participating in the race for the construction of a new political hegemony.

7. Neoliberalism only leads to socialism.

- Some people have said that capitalism had reached its limit. Without taking into account the factors in the regressions of building socialism in the last decades, not just the prestige of socialism, the state, political, collective solutions, the world of work, among others. The changes introduced by neoliberalism - including social fragmentation, the "North American way of life" as the dominant form of sociability - are obstacles to be overcome in a long, deep ideological and political struggle to be replaced by socialism on the agenda.

8. The alternative to the governments of Brazil, Argentina, Uruguay, Paraguay, is on the left and not right.

- The failure of attempts to build a radical alternative of the left to those governments, confirms that political polarization is between the progressivegovernments and the forces of the right. This has meant that, often, ideological sectors located to the left of those governments, are - objectively or even consciously - aligning themselves with the right wing block, ending by defining, in practice, not even an equidistance from the two established blocks, but they even consider the progressive bloc as their fundamental enemy.

9. The current integration processes are "capitalist" in nature.

- This vision disqualifies all the processes of regional integration, because they would not be familiar with a break with the international capitalist market, because they represent integrations in the framework of capitalist societies. If you include not only Brazil, Argentina, Uruguay, Paraguay, but also Venezuela, Bolivia, Ecuador. You cannot fail to understand the importance of creating spaces for alternatives to free trade treaties. No one understands the importance of fighting for a multipolar world, and weakening the imperial North American unipolarity. It is not understood how Alba promotes alternative forms of exchange to the market, the WTO rules in the direction of what the FSM calls "fair trade," in solidarity, complementary and not competition.

- Those who preach this position want to divide the left, trying to coopt their more moderate sectors and isolate the most radical. The left is anti-neoliberal and not in favor of FTAs, it favors social policies and not tax adjustments.

11. The current period is of retreats in Latin America.

- Some sectors, based on criteria unrelated to reality, broadcast discouraging pessimistic views on Latin America. Sometimes they use the criterion of the position of social movements in each country concerning the formation of governments, to determine whether there is progress or not, instead of defining the nature of these movements depending on the position you have in relation to these governments. They subordinate the social to the political, without realizing the extraordinary advances of the continent, especially if compared to the previous decade and the international framework, deeply marked by conservative predominance. Pessimism is a product of social isolation, which is alongside of the concrete forms which amounts to the history on the continent.

12. In the Uruguayan, Brazilian and Argentine elections, for the left, it doesn't matter who wins.

- There are those who say, as though the victory of Lacalle or Mujica represent the same thing for Uruguay and Latin America, as if returning the toucans or the victory of Dilma had the same effect as the replacement of Kirchner by Duhalde, Reutemann, Cobos or some other right-wing Argentine national hero, meant the same for the country.

- Since nationalist ideologies resurfaced in Latin America, with Hugo Chavez, who people rushed to compare to Peron, to disqualify it as "bourgeois nationalism" or just nationalism, has nothing to do with anti-capitalist struggle, etc.. Cliches are used here, too, without making a concrete analysis of concrete situations. The nationalism of governments such as Venezuela, Bolivia and Ecuador, recovering for the countries their fundamental natural resources to be at their disposal, are part of the anti-capitalist and anti-neoliberal platform in those countries. Each phenomenon acquires a different nature, as the context that is inserted, each claim, as the government assumes a different character. In the case of nationalism in Latin America today, it promotes further regional integration processes, thus having a character not only national, but Latin American.