Horror in Paradise: Another Anglo-Saxonic Massacre

In the land of the Baby P. horror story, where a small child suffered months of the most horrific torture at the hands of his own mother and her monstrous boyfriend, today occurred yet another gun massacre as a self-employed taxi driver ran amok, killing 12 and wounding 25 others, before turning the gun on himself. What makes people in Anglo-Saxonic countries suddenly snap? 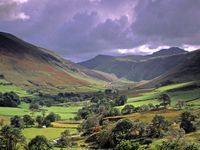 Horror in Paradise: Another Anglo-Saxonic Massacre

Today Derrick Bird, 52, brought horror to the quiet English countryside of rural Cumbria, in the north-west of the country. The shooting spree started at 10.30 a.m., when Bird shot a colleague and friend. After this he moved southwards, shooting dead 12 people, including his twin brother, and wounding 25 others, 3 of whom are in critical condition while five others are described as “serious”.

The weapons used have been recovered, a shotgun and a .22 rifle with telescopic sights. The murderer had told a close friend on Tuesday night “You will never see me again”. Local reports claim that a family row over inheritance or sexual taunts may have been the basis of the attack by this divorced father of two.

Why do these massacres take place in Anglo-Saxonic countries?

In 1987, also in the UK, Michael Ryan murdered 14 people, including his mother, injuring 15 others in Hungerford, Berkshire. After barricading himself in his former school, he shot himself. In 1996, Thomas Watt Hamilton entered a school in Dunblane, Scotland, murdering 16 children and a teacher, before shooting himself.

The USA is the true champion of gun massacres. The Fort Hood massacre of November 2009, when Nidal Malik Hasan murdered 13 people and wounded 30 others was the most recent in a long history of mass slaughters perpetrated by crazed citizens with guns. In April, 2009, a Vietnamese immigrant called Jiverly Wong slaughtered 11 immigrants and two workers at Binghampton immigrant centre in New York.

In March 2009, Michael McLendon killed ten people (among whom was his mother, his wife and four relatives) in Alabama. In February 2004, Steven Kazmierczak, 27, killed 5 students and wounded 18 others in Northern Illinois University, before turning his weapon on himself. December 2007, Robert A. Hawkins, 19, killed himself after murdering 8 people and wounding 5 others in Nebraska.

In Australia, 35 people were murdered and 21 others wounded by Martin Bryant, 28 in the Port Arthur Massacre in Tasmania, Australia in April 1996. Bryant is serving a perpetual life sentence without parole.

Without making knee-jerk reactions, it becomes clear that such gun massacres have three things in common: they occur mainly (not exclusively) in Anglo-Saxonic societies, are perpetrated by males and the killer usually turns the gun on himself. The reason cannot lie in the availability of weapons, because in societies where a young man gets a machine gun for his 14th birthday, such massacres do not happen.

True, other types of violence take place elsewhere and as far as society as a whole is concerned, in many cases the results are far worse. But what makes men suddenly snap in Anglo-Saxonic societies?