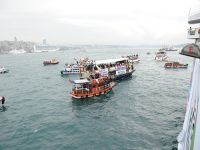 Israel Imposes Blackout on the Number Killed on Turkish Ship

Peace activists aboard the Turkish ship, Mavi Marmara, with hundreds of aid workers and activists aboard, report that they have been attacked. At least 20 persons have been killed at last report and over 50 more wounded. Israeli commandos apparently lowered themselves onto the Mavi Marmara with ropes. Passengers range in age from 88 to a year old and include Christians, Muslims and Jews seeking to end the blockade.

Technically speaking, Israel has committed an act of war against Turkey by attacking a ship sailing under the Turkish flag in international waters. Months ago when the mission was in the planning stages, Turkey predicted dire consequences should the Israels attack their ship. The Israeli ambassador was summoned to the Turkish foreign ministry Monday after the incident.

"The ambassador (Gabby Levy) was summoned to the foreign ministry. We will convey our reaction in the strongest terms," the diplomat said.

Shortly afterwards, Israeli military censors ordered a block on all information regarding those injured or killed during the storming of the ship.

No weapons are onboard the humanitarian aid convoy. Gunfire was heard under the cover of darkness. Hundreds of elected officials, former diplomats, aid workers and activists, including a Nobel laureate and many European legislators, are with the flotilla, traveling by sea to Gaza to break Israel’s blockade of the tiny strip of land.

Evidently they are witnessing Israel's brutality and murderous intentions first hand.  Israel is showing itself as a terrorist state, founded and established by acts of terrorism and sustained by state terrorism.

One boat in the aid convoy is flagged and registered in the United States. The ship is U.S. territory under maritime law, and the U.S. government is required to intervene if this "U.S. property" is attacked or illegally confiscated by Israeli authorities.

As of this writing, the attack is ongoing, the total dead and wounded will most likely increase.

Israelis supposedly took over the convoy. Waiting for international reaction...silence? excuses? glossing over? strong words with nothing to back it up? U.S. sending more weapons to Israel by federal express mail??

Statement by the spokesperson of

on the flotilla sailing to Gaza

The spokesperson of High Representative of the Union for Foreign Affairs and Security Policy/Vice President of the Commission Catherine Ashton issued a following statement today:

"We strongly urge that all involved act with a sense of restraint and responsibility and work for a constructive resolution. The EU remains gravely concerned by the humanitarian situation in Gaza.

The continued policy of closure is unacceptable and politically counterproductive. We would like to reiterate the EU's call for an immediate, sustained and unconditional opening of crossings for the flow of humanitarian aid, commercial goods and persons to and from Gaza."