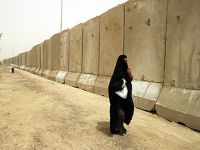 In the grand old west, everywhere you look, walls are going up...are we talking 1960s? No, we're not. Are we speaking of the east? No, we're not. It seems that the west is hardly able to contain the Pandora's box they opened up from back in the days of the Soviet-Afghanistan war when they made the major blunder of supporting fanatic, greedy criminal elements disguising themselves under the cloak of religion.

What goes around, comes around...now the west finds itself mired in the quicksand of Afghanistan and Iraq with none of the prestige or good intentions the Soviet Union had. The Soviet Union left behind schools, hospitals and a social system that guaranteed basic human rights and social benefits. The Soviet Union was not afraid to let the people of the country make their own way when troops were withdrawn. The country was able to sustain itself for nearly 3 years before U.S. backed criminals finally managed to get the walls to come crashing down...welcome to today where their reward soon followed with 9-11.

When the west has been completely exhausted, and they are well on their way, what will they leave? Millions of dead bodies, looted resources, ravaged women, destroyed homes and families, and most of all an ecological disaster that will haunt the area for billions of years.

Yugoslavia was a practice run for the devastation they have spread in the Middle East, not only in the countries they invaded, but in the aid, encouragement, financing and assistance to their Israeli allies.

Yet in order to protect their cowardly backsides...and they are craven cowards that shoot everything in sight while they remain fearful to even break a fingernail...here they are building walls.

Israel's West Bank wall has become the most visible manifestation of the Israeli military occupation and most pressing issue for Palestinians. The wall snakes through the West Bank on Palestinian land, leaving Palestinians on the wrong side isolated from their land, extended families, and way of life.

The Israeli wall is an illegal attempt to annex Palestinian land under the guise of security, it violates international law, is a barrier to any peace negotiations, and severely restricts Palestinians who live there, particularly their ability to travel freely within the West Bank and to access work in Israel.

Baghdad now finds itself in a constant state of siege, thanks to the loving, gracious efforts of the U.S. and NATO whose last resort is self defence by building a massive wall around the capital to keep out insurgents. Insurgents? Another official line is to "break the cycle of sectarian violence." Funny, there was no sectarian violence before foreign hooves set foot in Iraq. Perhaps they should buy a clue. May as well wish for some cheese from the Moon.

Meanwhile, a suicide car bomb attack targeting NATO troops in the Afghan capital has killed more than 20 civilians in one of the deadliest strikes in Kabul in months. Are some walls going to be built there, too? There are increasing protests about the total lack of concern for civilians being targeted. No, no, forget that. They are merely, according to the Orwellian term, "collateral damage."

Just like Hiroshima. Just like Nagasaki. Just like Dresden. Civilians must be terrorized in order to force them to demand the bad guys stop attacking you!

Freedom of movement in Baghdad will be limited by this wall and people will wait for at least an hour to enter. It will take about a year to construct the wall.

Once the 12 foot high wall is completed, most of the 1,500 checkpoints and many miles of cement barriers will be removed. To keep costs down, many of the barriers will be moved from central Baghdad to the outskirts and become part of yet another exterior wall.

Vehicles will be searched across ten-lane highways from 6am until midnight. After all this time, the city remains under a night-time curfew. Life remains difficult and precarious.

Baghdad Operations Command, the anti-terrorism group that reports directly to the Prime Minister, will supervise construction. It will also run the checkpoints, with an American-designed computer system to help identify known “insurgents" from their fingerprints.

In agricultural areas, a moat may be substituted. Surveillance cameras and unmanned reconnaissance aircraft will also be in use.

Construction has already begun. The Baghdad puppet government has already started building the security wall which will surround the capital and separate it from the surrounding provinces.

Baghdad has been the target of repeated suicide car bombings over the past year, some of them killing more than a hundred people in a single day.

The U.S. is apparently unfamiliar with the concept of letting people decide their own way of life. Those who want them to go home are called "insurgents" and "terrorists" but who are the real terrorists here?

Who appointed them supreme "deciders"? By what right do they steal, plunder and collect a sp-oil? Who are the terrorists again?

How about they go home and let people run their own country? Heaven forbid, freedom and democracy can only be delivered by bombs and guns. And now walls.

Perhaps they should try rebuilding the infrastructure, providing electricity, schools, hospitals. Fix what you broke at the very least. But that is not what the attack was all about $$$$$$. It was those weapons of mass destruction. Er..no. It was for the invasion of the Greater Los Angeles area by Sadaam and company. Er...no. It was to help the people of Iraq. Er...no. Things could not be worse there for the people.

Er...revenge for 9-11? No, I don't think so. For that, they need look no further than their own backyard of miscreants and allies.

The absolute height of stupidity is not learning from one’s mistakes and doing the same thing over and over again, expecting a different result. Stop trying to hold people to standards you don’t uphold yourself or expect your friends to uphold. Perhaps the west should think once, twice and three times before committing the same crimes for the same lies with Iran.