The police of Russia’s Nizhny Novgorod broke up a massive fight between local residents and African students of the city’s State Architecture and Construction University on May 18. The fight took place in the Pushkin Park, near the dormitory. Three police squads set the fighters apart and detained most active and aggressive individuals. 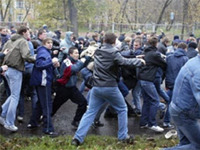 S everal other smaller fights subsequently took place in other areas of the city – near the television center and the dormitory of the Construction Academy.

About a hundred of people – approximately 50 African students and a similar number of city residents – took part in the massive fight in the Pushkin Park of the city, eye-witnesses said. Several people were hospitalized with various injuries, presumably brain contusions, RIA Novosti reports.

Investigators try to find the reason of such a large fight and the people who started it.

Eye-witnesses said that the brawl started in a street café in the park after two African students entered it. The conflict in the café quickly developed into a massive fight after other African students and white men rushed to help their friends.

The police of Nizhny Novgorod believe that the conflict was based on xenophobic feelings.