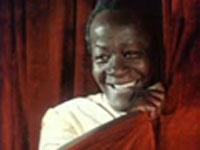 On 10th May, the 58 year old artist was found unconscious by local residents near one of the houses on Bogatyrskii prospect. An ambulance was called, but the actor did not regain consciousness.

Last Thursday, a man suspected of Romalio’s murder was arrested: 43-year old Khamzia Enikeev, a native of the Penza region, who has been living in St. Petersburg without registration. According to investigators, the man brutally beat the black actor on grounds of racial hatred, before fleeing the scene of the crime.

As fontanka.ru website writes, the arrested man took part in the first Chechen campaign and in the Persian Gulf war, during which he received government awards. According to the Komsomolskaia Pravda, he worked as a security guard in a shop in the building which the actor was found near. “On the 10th May, at 5.30 a.m., he started an argument with Romalio, and then beat him severely”, investigators told the newspaper.

The news agency Interfax does not name the arrested man. Also citing a police source in the northern capital, it reports that a suspect has been found in the murder case of an actor. “Law enforcement agencies, investigating this terrible crime, have found a suspect. The murder can be considered solved”, the agency’s source said.

Tito Romalio was a Brazilian by birth, a supporting actor who enjoyed the peak of his career during the 50s, 60s and 70s. He appeared in such films as “Chief Chukotky”, “Prikliucheniia Artemki”, “Jack Vosmerkin – Amerikanets”, “Chelovek-Amfibiia”, “Ostrov Pogibshikh Korablei”, “Zaveshchaniie Professora Douelia”, as well as in the serial “Sea Patrol” (2009). As a child he appeared in one of the main roles (the boy Pol) in the film :Zdravsnvuite, Deti!” (1962). In this film, Tito Romalio’s brother, Lol, played Pol’s sister.

Tito Romalio’s father (also Tito Romalio), was an actor in “Lenfilm”, a Brazilian who, in his time, played one of the main roles in the film “Tropoiu Groma”. Given their identical name, surname and profession, the actors were frequently confused.

As the Novye Izvestiia newspaper notes, the artist earned money in recent years by appearing in restaurants as a singer, although the dark color of his skin caused him problems on more than one occasion. Others, who have known Tito since childhood, also speak of this. “I’m sitting here and sobbing. Tito’s fate is a bitter one”, Elena Iakhontova said to the newspaper. “In Russia, he was branded a “nigger” all his life, humiliated himself in order to find work. A supporting actor had to be able to earn money somehow.”

Another black actor, no less famous in the USSR, is Jim Patterson, who played the role of a Negro in the film “Circus” alongside Liubov Orlova. For many decades he defined the attitude of Soviet people to dark-skinned people. Carefully passing the little boy from hand to hand, they demonstrated their readiness to give shelter to all those in need, to protect all the downtrodden. This is in stark contrast to the modern day attitude of people in Russia to people of other races.

The fate of radio director Lloyd Patterson’s son, who came to Russia from America, and his artist wife Vera Aralova, was happier than Tito’s. Having completed the Nakhimovskii Institute (a famous naval academy), he served on ships and a submarine; he then began to write. Jim was accepted into the Literature Institute, which he completed with distinction. He was noticed by the leading writers and poets of the USSR, and in 1967 was accepted into the Union of Writers of the USSR. In the next years, he stopped being printed, and Jim moved with his mother to the USA. They now live in Washington.

It is said that Jim travels the country with an exhibition of pictures of his mother in order to earn. He continues, as before, to write, and is trying to get a collection of poems published in English, the site “Nashe Kino” reported in 2006.