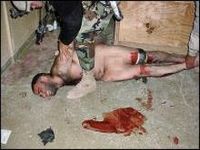 The use of torture goes against all human rules of the civilized world, against ethics, morality and international law. Then one wonders why the U.S. has used it on such a large scale in the knowledge that this will place them on the bench accused by the international community?

Everything indicates that the U.S. wants to alter its meaning: as a moral imperative to impose it against "terrorism" in order to terrorize and dominate. This conditioning will gradually make world public opinion, in our societies, banal, under the false pretense of being a lesser evil to a greater evil: "terrorism." As already said by the French poet, Jean de la Fontaine, in the seventeenth century, for human beings "rather suffer than to die, that's the motto of men." And specialists of torture are well aware.

When in 2005 news reports claimed that psychologists were working with U.S. military and CIA to develop brutal interrogation methods, the leaders of the American Psychological Association (APA) convened a working group to examine the issue. After two days of deliberations, the ten-member group concluded that psychologists played a "valuable and ethical role" in assisting the military.

There is a high level of confidentiality around the working group prohibiting members and attendees from disclosing records. It was not until a year after it released the names of the members of this group, in Salon.com [1], revealing that six of the nine members with voting rights belonged to military and intelligence agencies with direct connections to interrogations at Guantanamo and the CIA black sites operated, ignoring the Geneva Conventions.

The working group of the entity Psychological Ethics and National Security (PENS, in English) met in response to growing evidence that psychologists not only are involved in the procedures that have horrified humanity, but in fact were in charge of designing these brutal tactics and training interrogators in these techniques.

Two psychologists in particular played a central role: James Elmer Mitchell, who was hired by the CIA, and his colleague Bruce Jessen. Both worked at the classified military training program known as Survival, Evasion, Resistance and Escape (SERE, in English), which conditions soldiers to endure captivity in enemy hands.

In a rather quasi-scientific manner, according to psychologists and others with direct knowledge of their activities, Mitchell and Jessen reinvested the tactics inflicted on SERE trainees for use on detainees in the "global war on terror."

With the full adoption of SERE techniques for interrogation by U.S. military, the CIA placed Mitchell and Jessen in charge of training interrogators in brutal techniques, including "waterboarding" [torture technique] in its network of dark sites. Meanwhile, it is increasingly clear that the U.S. has sacrificed its conscience and its global image by tactics that are, by far, ineffective.

With nearly 150,000 members, APA is the largest organization of psychologists in the world. Unlike the American Medical Association and American Psychiatric Association, that since 2006, have completely banned the participation of their doctors, the APA continues to allow its members to be involved in the interrogations of detainees, arguing that their presence ensures safety and avoids questioning abuse.

Dr. Jean Maria Arrigo, one of three civilian members of the 2005 PENS task force, whose task it was to consider the appropriateness of the involvement of psychologists in harsh interrogation methods, ensures that the highest levels of the Department of Defense (DOD, in English) predetermined the outcome of the working groups. Citing a series of irregularities including hustling, intimidation and secrecy, Arrigo says the task force was far from balanced or independent.

It revealed that the APA President, Gerald Koocher, exercised strong control over decisions of the working group and strongly censured dissidents. Six of the ten members held high positions in the DOD, clearly in response to accounting decisions that had already been taken. These were:

- A) the adoption of a permissive definition of torture in U.S. law, unlike the strict definition in international law and

- B) the participation of military psychologists in interrogation scenarios.

Many annoying psychologists insist that APA policy has made the organization an entity that allows torture.

In APA's annual convention of August 2007, members submitted to the Council of Representatives a moratorium onthe amendment of the decision of the APA:

"Be it resolved that the objectives of the APA will be the development of psychology as a science and profession and as a means of promoting health, education and welfare. Therefore, the role of psychologists in settings where detainees have been deprived of adequate protection of their human rights should be limited to being health personnel that provide psychological treatment."

An overwhelming majority of theCouncil voted against this measure which would have prohibited the participation of its members in abusive interrogations of detainees.

In a heated meeting of professionals following the convention, dozens of angry psychologists testified. Among them, Dr. Steven Reisner, a member of the Coalition for an Ethical APA, who asked why the Council of Representatives voted to reject the moratorium, in clear contradiction with the beliefs of the vast majority of the membership of APA.

Reisner reflected on the lack of ethical standards essential for a partnership and that for its members. "This refers to the essence of who we are as ethical psychologists. If we cannot say 'No, we will not participate in interrogations at CIA black sites' I think we have to seriously question what we as an organization and for me, what my allegiance is to it or whether we should criticize from the outside at this time."

A month after Salon published "The teachers of torture by the CIA" Vanity Fair [the magazine] followed in July 2007 with an in-depth article that revealed more details about the small cabal of psychologists who helped create the brutal interrogations program by the CIA, a model that metastasized at Guantanamo Bay, Afghanistan and Iraq in places like Abu Ghraib.

For December, readers were taken on a journey inside the secret "black sites" of the CIA, when Salon published the first in-depth interview with a former prisoner of the agency, Mohamed Farag Ahmad Bashmilah. Enclosed, Bashmilah even provided chilling pictures of his barren cell. Apparently, the Yemeni was guilty of nothing more or less than being in the wrong place at the wrong time: the CIA released him after nineteen months of harsh imprisonment.

"Whenever I saw a fly in my cell, it filled me with joy, '" he said, speaking of the overwhelming sensory deprivation and isolation, "but I wanted to slip away under the door so that no prisoner would be like me.'

On April 22, 2008, the Washington Post published an article suggesting that the U.S. government had gone far beyond the abuse of detainees, subjecting them to stress positions, sleep deprivation and sexual humiliation, and perhaps even resorted to drugs that alter the mind to further disorient the prisoners. Somehow, the agency appeared to believe that it would provide them with reliable information. Later that month, Senators Joe Biden, Jr. (D-Delaware), Carl Levin (D-Mich.) and Chuck Hagel (R-Nebraska) asked the inspectors general of the Pentagon and the CIA to investigate the matter.

In May 2008, the inspector general of the Justice Department released a separate report showing that for years FBI agents had complained of harsh interrogation tactics used by the CIA and the Pentagon. This concern fell on deaf ears in the National Security Council.

It would be great to say that in the end justice will prevail. However, when it comes to torture, most congressional efforts to investigate the behavior of the CIA and the military have been, by far, anodyne.

At least in theory, as I write these lines, the Senate Committee on the Armed Forces is still investigating the activities of James Mitchell and Bruce Jessen, the two psychologists first identified by Hall that allegedly helped the government to implement the reverse engineering tactics created to help elite soldiers to resist torture interrogation techniques. The Judicial Committee of the House of Representatives is also investigating the matter.

But few expect that anyone in the administration would be taken by force before any kind of court, and the White House is completely convinced that abuse is an effective tactic of interrogation, and is equally committed to protecting those who use it - few experts believe that justice will be served. This applies to the psychologists who created the diabolical agenda and gave the authority to carry it out.

Physicians for Human Rights has consistently pursued this story. You can learn more about this organization and discover how you can participate by visiting: