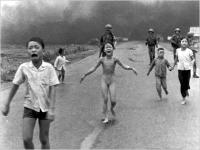 The direct participation of the United States lasted up to 1973. They ended up asphyxiated and broken like the French. "Their supremacy was technological," says la veteran of the war, General Do Xuan Cong. "But their armaments were for distance wars, with airplanes, rockets and bombs. We reduced the space, forced combat into our backyard for their troops. Modern arms had no use, did not substitute their lack of morale for the struggle". Washington was forced to the negotiations in Paris, which would lead to the retreat of their soldiers in 1973. The article by Breno Altman.

It was still dawning when thousands of Vietnamese, organized in columns, began to approach the Park on 30th of April, before the ancient presidential palace, in the city of Ho Chi Minh. Labor unions, universities, factories and organizations as well as peasants sent their delegations, besides the armed forces. They were responding to the convocation for the demonstration that would celebrate the triumph of socialist Vietnam against the government of Saigón (old name of the city) and their North American allies.

It was not a rally of the western type. The time-table was already extravagant. They were all warned that the activities would begin punctually on the 6h and would be closed three hours later, before the crazy heat of Ho Chi Minh won the day. The one who was occupying the armed terraces in the central part of the park were the authorities and the guests. The citizens, with their groupings, were the persons in charge of the show.

Approximately 50 thousand people were paraded before the grandstands. Theatrical groups represented moments of the 21 year war against the North Americans and then South Vietnam. Great music, even with a little pop rhythm, besides the predictable chords of the International (the historical socialist hymn) and of revolutionary songs. Then, a long march, with soldiers, workers, women, intellectuals, students and peasants with their belts and flags, besides modest choreography.

But the biggest emotion was in the faces of the veterans of war. One of them was the 74-year-old Colonel Nguyen Van Bach, with completely white hair. Born in the province of Binh Duong, in the south of the country, he joined armed combat in 1947, at age 11. It was still the time of the war against the French, who did not accept the independence won in 1945, under the leadership of the Communist leader, Ho Chi Minh.

Van Bach was still fighting at the end of April of 1975. He was part of the guerrilla groups. It was in a detachment that was already controlling the city of Tan An, in the province of Long An, located in the Mekong delta. It was there what he learned about the fall of Saigon into the hands of his comrades. "I had a joy that was so great that it caused tears", he remembers. He still gets emotional, as several of his friends, while remembering this date.

Finally, on the 30th of April of 1975, more than 30 years of continuous regular warfare ended. Since it had been formed, in December of 1944, the first platoon of communist guerrillas under the command of Vo Nguyen Giap, right arm of Ho Chi Minh, the Vietnamese fought successively the Japanese, French and North American invaders.

A French colony since 1856, Vietnam was occupied by Japanese troops during the Second World war. Communists assumed the front lines in the struggle against the soldiers of Hiroito, using the collapse of Paris dealing with the Nazi occupation. They led a front of several political currents, called Vietminh, and declared the independence of the country after the Japanese capitulation, in August of 1945. On the 2nd of September of the same year the Democratic Republic of Vietnam was born.

General De Gaulle, president of France, who saw Nazism defeated, ordered his troops to suffocate the Vietnamese rebels. There was eight years of bloody combat. The men of Ho Chi Minh and Giap organized a mighty guerrilla resistance, which progressively terrorized and wore out the French. More than 90 thousand Gauls lost their life on the battle fields.

The final thrust against the colonists was in 1954. It was known as the battle of Dien Bien Phu, a region in the northwest of Vietnam, near to the frontier with Laos. The French were imagining themselves invulnerable in this strategic position, they were planning their counter-offensive with a great concentration of human and material resources. But the Vietminh, through tracks in the jungle and tunnels, were encircling the place without being noticed.

After eight weeks, between 13th of March and 7th of May, the troops of general Christian De Castries were destroyed and demoralized. It was the last chapter of the War of Indochina. The French, defeated, accepted the negotiations that would lead to the Geneva accords, in 1954. By the terms of this treaty, Vietnam would be temporarily divided into two, north and south of latitude 17. But general elections would take place in 1956 to reunify the country.

When there was the prospect of communist election victory, conservative groups led by the Catholic Ngo Dinh Diem made a coup in the south and canceled the elections. The United States, who had been the main financiers of the French operations, assumed the defense of the Saigon regime. They provided, in principle, resources, weapons and military advisers.

The Communists reacted and led, from 1960 a popular guerrilla uprising against Diem, articulated by the National Liberation Front with the support of the North. The Americans, given the fragility of its allies sent troops to defend them. It was the beginning of the Vietnam War.

The house began to fall after the Tet Offensive (the Vietnamese new year) in 1968, when the guerrilla forces attacked dozens of targets simultaneously, including the very American embassy in Saigon. The White House had more than 500,000 men in combat. The society was getting angry over the deaths, defeats and lies.

Washington was forced to the Paris negotiations, which would lead to the withdrawal of its troops in 1973. The Saigon regime stood on its own account. It did not remain standing for long. In 1975, Vietnam regained its national unity and the Communists won the longest war of the 20th century.

The dead Vietnamese civilians and military, reached three million, compared to only 50 000 "nephews" of Uncle Sam. Two million citizens, including children and grandchildren's generation of conflict, suffer some genetic deformity caused by dioxin, a byproduct carcinogen present in Agent Orange, used widely by Americans. Besides the human losses, the economy was almost brought to the Stone Age, as advocated by the U.S. General Curtis LeMay.

The Vietnamese, in these past 35 years, had to focus on other problems, for which the guerrillas and their inventions were not a solution. How will they feed and develop such a poor and destroyed nation? That is the other story of the indomitable Vietnam.

The next days (from 30/4), Opera Mundi will publish a series of special reports about Vietnam, the Vietnamese and how they live after 35 years after the end of the war.

(*) Breno Altman is a journalist, director of the site Operates Mundi (www.operamundi.com.br)