A survey published on Monday (19 / 4) indicated that most Americans want Washington to restore diplomatic relations with Cuba and allow companies in this country to carry out operations on the island. The research conducted by the group Cuba Business Bureau / Insider Advantage (CBB) has indicated that support for the restoration of ties with the government in Havana is 58%. According to the data, 33% of respondents expressed that they oppose the measure, and 9% indicated that they have no opinion on the issue.

The CBB provides information to Americans about business opportunities on the island.  The phone consultation conducted throughout the country also indicated that 61% support that the government allow U.S. citizens to travel to Cuba, with 25% opposed.

Regarding the concept that the U.S. allow U.S. firms to maintain business in Cuba, 57% agreed and 30% were opposed, said the research report which has a margin of error of 5%.  Last year, the U.S. House of Representatives approved a bill that, among other clauses, modified the travel restrictions to Cuba. This project has allowed Cuban-Americans to return to the island once a year rather than once every three years by the laws in force since 2004.

Although the current government has resumed talks on immigration of Cubans to the United States, President Barack Obama has imposed conditions to end the trade embargo in force for almost 50 years.  He said the blockade will be lifted only "when the island improves problems such as human rights" - an incongruous speech, as part of a country which holds within itself the island of Cuba, in Guantánamo, several prisoners without trial and who were tortured.

With information from Reuters
Translated from the Portuguese version by: 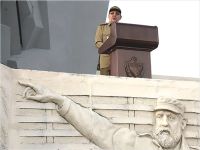