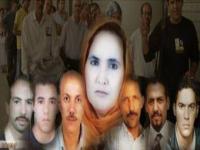 Entered in the bar associations in Casablanca, Agadir and El Aaiun, acting as lawyers for the accused in the investigation file No. 2837/2546/09 KA, the first section of this instruction before the military court in Rabat

Inform the public of the following:

In accordance with the statement that we issued on March 28, 2010 and through which we informed the public of the worsening state of health of our clients on a hunger strike since March 18, 2010.

* and in line with the insistence of the relatives of prisoners.

* and taking into account the deterioration of the health status of members of the group in prison, we deemed it imperative to inform the public, in a direct manner on the actual state of the hunger strikers.

Therefore, lawyers Boukhaled Mohamed, Mohamed Lehbib R'guibi, Mohamed Fadel Leili and Nourdine Dalil moved, on April 12, 2010, to meet with the investigating judge at the military court in Rabat. The latter informed us that the investigation, whose purpose relates to the six hunger strikers, as well as Degja Lachgar on parole, is still ongoing.

After the interview with the investigating judge, we conducted a visit to the group of prisoners in the local prison of Salé, where the prisoners were presented to us in wheelchairs, with the exception of one that still manages to remain standing. We were informed that Saleh Labouihi also observes, too, a hunger strike, despite the admittedly serious state of his health.

The visit to the prisoners allowed us to see the seriousness of the health status of the detainees that is manifested by their loss of weight and consciousness, headaches and physical pain.

Although prisoners have a good moral sense and remain very attached to life, they are assured of the justice of their cause and confident about the future, they are extremely angry about the neglect and indifference involved by the state, since up to the day of our visit and after 26 days of the hunger strike, no person in charge was good enough to go see them or talk with them. According to them, the press and even most human rights advocates observe the same indifference about it in this respect.

We have tried everything to bring them to stop, even momentarily, their hunger strike, but without success.

At the same time we call public attention to the extreme gravity of the health of the detainees who continue to observe a hunger strike, Alisal Tamek, Brahim Dahan, Ahmed Nasiri, Yahdih Tarouzi, Rachid Sghayer and Saleh Loubeihi, we direct most particularly to all parties interested in this process, to the level of management of the prisons or the level of justice, even at the level of political decision making, to ask them to intervene urgently in order to save the life of the hunger strikers.

We appeal to public opinion, the media, organizations of human rights activists and ask them to follow closely the situation and help them realize their hope on their immediate release or in their rapid appearance before a fair and impartial tribunal.