According to Kuwaiti newspaper al-Rai, Syrian army supplied Scud missiles to Hezbollah group in Lebanon. The missiles could target most of Israel's territory. 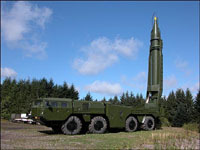 According to the report, special services of Israel and the West discovered back in 2009 that the Syrian army has been training Hezbollah operatives on how to operate Scud missiles. At the same time Israel has warned Syria of its intention to bomb Lebanese and Syrian targets should the missiles cross the border and reach Hezbollah.

Yet, according to al-Rai, in early 2010 Damascus has given Scud missiles to Hezbollah. Allegedly, Israel was prepared to eliminate the motor column with missiles when it was moving out from Syrian territory to Lebanon, but preferred to employ diplomatic methods. Israel allegedly requested that Washington influences Syrian President Bashar Asad so he would order to stop the motor column, or military forces will be used to deal with the issue.

On April 15 Israeli Ministry of Defense made a statement saying that Scud missiles are able to “change strategic balance of forces” in the Middle East. Israeli President Shimon Peres directly accused Damascus of supporting terrorists stating that Syria was not a peaceful country. He said Syria was leading a double game by talking about peace while sending missiles to Hezbollah “to threaten Israel.”

It is hard to remember him having such a sharp reaction before. It was caused by the fact that Scud missiles are far more dangerous than “Katyushas” and Iranian missiles used by Hezbollah against Israel until recently.

American White House turned its attention to the issue. Press Secretary Robert Gibbs openly stated that Obama’s administration was extremely concerned with the fact that terrorists were provided with the weapons capable of destabilizing the situation in the area, and emphasized readiness to further assist Israeli safety.

In March and April, representatives of the State Department addressed Syrian and Lebanese officials with a respective warning, indicating that the US will not be able to prevent the attacks on Lebanese targets if weapons smuggling does not stop. Earlier Syrian and Iranian weapons have made their way to Lebanese territory through the Syrian border.

The official Damascus said that delivery of Scud missiles to Hezbollah was a lie, which can be seen from the information spread by Israel. The office of the Syrian President stated that the al-Rai report was made up by Zionists. Syrian Embassy in Washington DC also contested the claim and reminded Israel about its nuclear program, saying that this was the way Israel was trying to distract attention from the issue.

"If we are to discuss armament in our region, we should begin with Israel's massive nuclear weapons arsenal and continuous arming with top-caliber U.S. weapons, which helps perpetuate its occupation of our territories," embassy spokesman Ahmed Salkini said. "The timing also indicates a sinister attempt to undermine any U.S.-Syrian rapprochement," he added.

Israeli officials have not directly claimed that Hezbollah had Scud missiles in its possession. Nonetheless, the US State Department expressed its concerns that powerful weapons are getting into hands of radical groups, including Hezbollah. They believe that this threatens safety of Lebanon and promised to negotiate with Syria on this matter.

In the past few months statements of Syria and Lebanon regarding Israel have become increasingly more belligerent. In late March, President of Syria Bashar Assad gave interview to al-Manar TV channel that belongs to Hezbollah. In the interview he called Israel an enemy that understood nothing but force. He thinks that Israel gets increasingly weaker, and military forces can no longer guarantee its safety.

One of the most alarming facts is that Lebanese officials have been lately openly supportive of Hezbollah. Surprisingly, political forces of the country represented by different religious communities have rallied around this movement. For instance, Walid Jumblatt, the leader of Lebanon's Druze and Michel Suleiman, the President, had meetings with Bashar Assad in March and April where they asked that he supports this radical movement. They made statements against Hezbollah’s disarming, which was Israel’s request after the second Lebanon war of 2006. Lebanese Prime Minister Saad Hariri recently stated that his army will support Hezbollah if Israel attacks the movement.

What’s behind the mutual accusations of Israel and Syria? Pravda.ru asked Alexander Pikaev, head of the department of disarmament and conflict settlement of the Institute of World Economy to find out.

“Another scandal reminds us once again that, in fact, these two countries are still in a state of war. Damascus is frustrated that Tel-Aviv still occupies Golan Heights and continues to support radical groups, including Hezbollah, in various ways. So such supplies cannot be ruled out.

Connections between Syria and Hezbollah, including weapons connection, are not big news. This is common knowledge. Syria has been blamed for supplying weapons, including Iranian, to Hezbollah for a long time. I doubt that Scud missiles were supplied. The border between Lebanon and Damascus is very well visible from Israeli space satellites. Knowing this, Damascus will hardly likely engage in supplying bulky Scud missiles which are easy to catch for Israeli. Syrians know that Israel will not allow the missiles capable of reaching Tel-Aviv getting into hands of radicals. It is also doubtful that UN forces located in Lebanon would let Scud missiles (which have an impressive size) into Beqaa valley where Hezbollah militants are located.“

“Israel itself does not have evidence confirming that Syria supplied Scud missiles to Lebanon. In any case, Israel provided no evidence,” the expert emphasized. “I do not rule out that this fuss was created by Israeli military to obtain additional financing of their own ballistic missile defense system,” he suggested.

Here is a surprising fact. This hullabaloo was caused because of the missiles hardly capable of seriously damaging Israel. It has nothing to do with the age of the weapons which is over 50 years. (they were developed in the USSR in 1957).

American AD Patriot and Israeli ballistic missile defense are capable of intercepting up to 80% of similar missiles. Under these circumstances, can we say that Israel is in serious danger?