Kyrgyzstan May Become Another Afghanistan 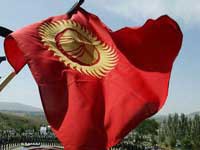 Kyrgyzstan May Become Another Afghanistan

The Russian President said that there is a serious risk of Kyrgyzstan splitting into North and South. It is very important to prevent a civil war in the country because terrorists and extremists will most likely take advantage of it. He said that Kyrgyzstan risks becoming a “second Afghanistan,” and Russia needs to help the country out of the stand-off between the new and old governments.

"Kyrgyzstan is once again going through the stage of illegitimate development and, unfortunately, Kyrgyzstan’s authorities who did not make efforts to consolidate the society, negotiate with the opposition, and conduct economic deals, are responsible for it,” Russian President stated. He reminded that five years ago Askar Akaev, the President at the time, was also “removed by the opposition.”

Contradictory information keeps coming from Bishkek. The interim government allegedly started negotiations with Bakiyev about voluntary abdication of president’s authority. To “speed up the process” the interim government issued a decree that removes Bakiyev’s immunity.

The President was given 24 hours to return to the capital, otherwise he would be arrested. The interim government's deputy head Azimbek Beknazarov, former prosecutor, had said earlier that if Mr. Bakiyev did not give himself up, the authorities would launch an operation to detain him with the help of the special services. The 24 hours have elapsed, but there is no information about attempts to arrest the President.

According to some information, he was ready to resign, but only if his and his family’s security was guaranteed. Bakiyev did not say that directly, but stated he was not going back to Bishkek. He invited the leaders of the interim government for negotiations in the city of Jalal Abad, where he spoke to his supporters earlier.

But chief of staff for the interim government, Edil Baisalov, rejected the invitation to negotiate. “There is nothing to negotiate about,” he stated, calling the President a “bloody dictator.” He thinks that the President has no control over the situation in the country. “At the moment he is only a President of his home village,” he said.

The members of the Ak Zhol party who used to be loyal to Bakiyev have virtually betrayed him when they suggested that the interim government should deal with the vacuum of power. Namely, the parliament can impeach the President, and then Bakiyev will no longer be entitled to name himself the President.

The President had no reaction to this behavior of his supporters. Yet, visiting Jalal Abad, he explained his position: “I have been saying for four days that I am ready to meet them (the interim government). But there was not a single message from Roza Otunbayeva.”

“The new government cannot guarantee my safety, therefore I see no point in returning to Bishkek,” he added. Answering the question about his intentions to ask for asylum, he said: “I am not considering this issue.”

There is a rally of the President’s supporters on the central square of Jalal Abad, chanting “Bakiyev is our President!” Supporters of the interim government also rally on the square. A conflict may arise any moment.

Meanwhile, experts are discussing various ways the situation could develop. First option is Bakiyev’s arrest. In this event the President will be charged for deaths of over 80 people. It is not ruled out that he will be sentenced to capital punishment rather than life sentence.

The second option – Bakiyev leaves the country, which is hardly likely. Russia, the US, China or EU did not express their willingness to accept the President. Finally, the third, most horrifying, option – a civil war between north and south. As a result, Bakiyev, who represents south, can be physically eliminated.

It is a gloomy prediction. If the situation is not resolved in the near future, Kyrgyzstan may turn into another hot spot of the post-Soviet space, the “second Afghanistan” the Russian President talked about.