Brazil Will Not Support Sanctions Against Iran at Nuclear Safety Summit

Brazilian President Luiz Inacio Lula da Silva was ironic about the signing on the last day (8) in Prague, of the treaty of nuclear disarmament by Presidents Barack Obama, U.S., and Dmitri Medvedev of Russia. 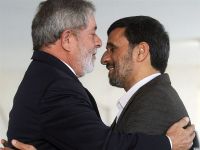 Brazil Will Not Support Sanctions Against Iran at Nuclear Safety Summit

"To deactivate what?" To deactivate what is defeated does not make sense. I have in my home a box of medicines and I am removing the losers. Either we are serious about disarmament or not and we admit that there is a group of countries armed to the teeth and others remain unarmed," said Lula.

The Brazilian president was in Washington, the United States, to attend the Summit on Nuclear Safety, where international cooperation will be discussed in the area of physical protection of material, nuclear facilities and combating nuclear terrorism.

If it happens that China will support sanctions on Iran, Brazil may be isolated. The Brazilian position to reject new sanctions against Iran could be put in check if China decides to support the measures.

"If China agrees on new sanctions, it will show that the major world powers are concerned about the nuclear issue of Iran. Ignoring this fact is not the correct direction to be taken by a country that wants to be a global power," said Mauricio Cardenas, director of the Brookings Institution in Washington.

The Iranian nuclear issue should be the focus of discussions among 47 countries at the Summit on Nuclear Safety in Washington. So far, Brazil and China have adopted similar speeches on the subject, with demonstrations against the imposition of a fourth round of UN sanctions against Iran and the defense of dialogue as the best path.

Although against sanctions on Iran, Beijing is showing signs that they may change their position. The Chinese government has already agreed to "discuss" the sanctions, and sent a representative to a meeting of the UN Security Council to discuss the issue. "Brazil may have to stop supporting no sanctions if China does so," said Alireza Nader, an Iran expert with the Rand Corporation.

China is a permanent member of the Security Council, alongside the United States, France, Britain and Russia, and thus has veto power over resolutions of the board. Brazil is also part of the council, but with a rotating wave, with no power to veto resolutions.

The Brazilian government, however, wants to get a permanent seat in the future. Russia, another permanent member who was also opposed to further sanctions against Iran, recently expressed support for the measures.

The United States and other allies continue to press the Iranian government's on its refusal to halt its uranium enrichment program. These countries fear Iran is secretly working to make nuclear weapons.

The Iranian government denies these allegations and says its program is peaceful. The sanctions already approved by the Security Council so far proved ineffective in pressuring Tehran to halt its nuclear program.

The new sanctions under discussion, according to experts, would be directed at companies linked to Iran's Revolutionary Guards, who control business at home and abroad.

After the five permanent members of Security Council reach agreement on a new round of sanctions, the resolution is put to a vote, with the participation of ten other members with rotating waves.

"In general, Brazil's position would not be crucial. But Brazil is the only country with a good reputation overall, considered a 'good global citizen,' which seems to support Iran at the moment," says the chairman emeritus of the Institute of Analysis Policy Inter-American Dialogue, Peter Hakim.

The analyst says that one should not expect Brazil to change its position all of a sudden, if China decided to support the sanctions. "But it could change at any time. Or it will not be taken seriously," says Hakim.

Mauricio Cardenas, an analyst at the Brookings Institution, said that Brazil's image could be tarnished if it persists in supporting Iran, and that is a matter that concerns the entire international community, to disagree is not a sign of independence, "it is a sign that Brazil does not understand the risks."

The official program of the Nuclear Safety Summit provides sessions and discussions on international cooperation to prevent nuclear terrorism. According to the White House, the countries will discuss joint and individual measuresand get a plan of action on the issue. The Iranian issue does not appear on the official agenda, but should be handled during the bilateral meetings planned for the two-day meeting.

The U.S. president, Barack Obama, has been holding a series of bilateral discussions, including with Chinese President Hu Jintao. The summit comes as the nuclear issue occupies a prominent space on the political agenda of Obama.

Lula advocates a "right" to nuclear energy and Iran promised to complain to the UN against the new U.S. nuclear policy. Iran has signaled it will insist on having its nuclear program, and Brazil has shown that it is against the imposition of new sanctions, as how the Americans and Europeans want.

Merkel said it was good that the summit of nuclear safety sees representatives from China and Russia, which so far proved reluctant to impose sanctions on Iran.

Iran rejects nuclear decisions of the summit and says it will submit a complaint to the UN. According to Tehran, the decisions taken by the summit are already 'known in advance', and says it does not feel in any way bound by commitments from the nuclear safety summit.

"The results of the Washington conference are known beforehand, and none of its conclusions can be binding on countries that do not sign the agreement," said Asghar Soltanieh, representative of the Islamic Republic in the International Atomic Energy Agency (IAEA)."

The Iranian Ministry of Foreign Affairs is to submit an official complaint to the UN by making it a "nuclear threat from U.S. President, Barack Obama, against Iran," announced the spokesman of this Ministry, Ramin Mehmanparast today.

According to Fars news agency, Mehmanparast thus referred to the U.S. nuclear posture expressed by President Obama, who threatened - as interpreted by Iran - to use nuclear weapon against countries like Iran and North Korea.

"Let the UN officially denounce such statements from a country that possesses nuclear weapons," and stated that "the new generation of centrifuges (under construction in Iran) to accelerate production of nuclear fuel have no military purposes."

During the act of celebrating the National Day of Atomic Energy, in Tehran, Iranian authorities announced the fabrication of the third generation of centrifuges, six times faster than the first in a new challenge to the international community.

Mehmanparast argued that Iran has to produce 20 megawatts of electricity set in the bill approved by Parliament and it needs to build 20 nuclear plants of the same size as the central Busher plant.