For the young peasant Pedro Antonio Marin, there were many questions that came to him during those terrible years of the late 40s when the leader Jorge Eliécer Gaitán was murdered and thereafter the state unleashed cruel violence in camps, towns and cities, which forced him, like hundreds of thousands of other peasants, to take refuge in the bush ("enmontarse") to save his life. 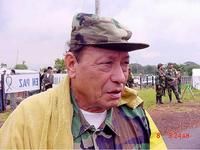 It is in this coming and going through the paths and hills in the middle of desolation, death and destruction that he found his stride, getting the answer to questions, seeing the landscape increasingly clear: it was directly by the violence against the cliff below, a barbarism against the people. And so, joining with others that like him were suffering the same situation they resisted to be left to kill in an unarmed and defenseless form, as he organized the first nucleus of armed resistance.

And it is in this initial struggle to preserve life where all his potential emerged as a driver and exceptional leader, those qualities that rise to full power when he welcomes revolutionary ideas and assumes as a guide the Marxist-Leninist doctrine, confirming in it with what experience had shown him. The solution could not be on an individual basis if we are dealing with a social problem with an economic basis, which is what should be transformed

Since that moment the need for radical transformation was maintained and all his energies were devoted to create the certainty of this possibility, so in a symbolic act of profound significance, he assumed the name of the union leader Manuel Marulanda Velez, vilely murdered by the dictatorship.

He dreamed and believed in peace, always. Not the peace in the tombs that the oligarchy offers, no, but in peace, reconciliation and reconstruction of the country on new and solid foundations, to secure a more equitable distribution of wealth, that contemplates the dignity of man and as a human being the basic center of life in society.

In the two years since the physical disappearance of Comrade Manuel Marulanda Velez, his emblematic image grows as a symbol for the peoples of the world looking at armed rebellion as the best way to a better future.

The myth that surrounds the legend of the oldest living mobile guerrilla war chief looms against the fall in the proportion of the role played by his class enemies. Uribe Vélez has 5 months to finish his second term, and is more than a cipher who went through the Casa de Nariño and swore from the heights of bourgeois power to put an end to this man known by the alias of accurate shot (Tirofijo-Sureshot) and his myth. The tiny beings simply pass, the great ones transcend.

Today we see that the 46 years of resistance initiated in Marquetalia are the practical and theoretical work of Comrade Manuel Marulanda and Jacobo Arenas, and their names as precursors of the Second Independence will grow over time, and new victories are to come. In exchange, both the oligarchic regime that they fought and its most prominent figures are twisted in the manure of disgrace and oblivion.

With the failure of the reelection claim of the paramilitary president, he sank at the right time the horrible parauribista night in Colombia. The courage of the people, the armed guerrilla resistance, an international environment of changes and the dignity of some magistrates were able to bar the president's personal ambitions, vile spearhead of the U.S. government wishing to unnecessarily and in vain to accustom the Colombians to terror and fascist paramilitary violence.

The input of a strategist, already incorporated in the cumulative universal experience of guerrilla warfare, to Comrade Manuel has to be added to have been able to build and run a guerrilla movement in a country like Colombia with domestic political conditions and specific mutant historical periods. To have known to read these national peculiarities, is what explains the prolonged resistance, strength and growth of the FARC-EP. He did not accept schemes or dogmas in his military and political vision of a master and conductor of guerrilla war. He leads the ship of the resistance with the fine touch that gave him the experience and the practical implementation and study of Marxism Leninism.

The combination of forms of simultaneous struggle and of the masses in a country whose ruling classes do not spare resources to destroy the people's struggles are the most complete design of Comrade Manuel's contribution to the worldwide experience of revolutionary guerrilla warfare. In the two years since his death, the FARC-EP continues in his struggle preparing the new dawn of the Bolivarian awakening of Latin America for the New Colombia.

This March 26, is the second anniversary of the death of Commander Manuel Marulanda Vélez, in which we recall his memory, is also the continental platform for all those who resist weapons in the hands of the oppression of man by man and are seeking national liberation and socialism. Hence this is the most appropriate date to claim, with all the force that brings forth the legacy of Commander Manuel Marulanda Velez, to the Universal Right of the people to armed uprising.

The mobile revolutionary guerrilla war force in Colombia follows current guerillas uniting their new flags, truths and reasons. The pathways in the liberation struggle are strengthened against the foreign invader and its military bases of occupation.

Eternal Glory to the memory of Commander in Chief Manuel Marulanda Vélez!

We have sworn We Will Win, and Overcome!

Manuel Lives, The fight goes on!