Brigade 17 of the Army and the Colombian Air Force bombed the Indian community of Alto Guayabal Urad Jiguamiandó the Reservation, on the border between Antioquia and Chocó, on January 30, 2010 at 3:30. Several Indians were left gravely wounded as a result of this attack and the death of a newborn Indian baby resulted. The clear intention of the bombing is to displace the indigenous and black, to make way for the Northern Mandé mining project. One of the most devastating and arbitrary plans, the predators move in the jungles of Chocó. It is located between Carmen del Darién, Chocó, and Murindó, Antioquia. 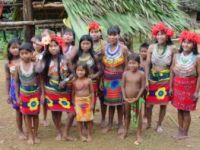 Insurance for the existence of large deposits of gold, copper and a little mineral named, molybdenum, the Uribe government has given the multinational Muriel Mining Co., Anglo Gold Ashanti and Glencore all possible and impossible concessions and given powers to make and dispose of an area of 16,000 hectares. However, these collective lands are owned by the black communities of Jiguamiandó and Indian reservations of Urada-Murindó Jiguamiandó and the Embera-Katio ancestral territories.

For obvious reasons these settled communities oppose the development of this project, which is why the Colombian government, violating all norms of domestic and constitutional principles, international standards and human rights and counter to the state of social law, order the militarization of the territories and the bombing and burning of the Tambo (Indian dwellings).

In addition, Brigade 15 of the Colombian National Army invaded the indigenous reservation in the Urada Rica Area, the military ended with the catch pan plantings and fruit trees, built helipads that are used by the concessionaire for the transportation of its employees, three hectares of forest were cleared by the company, Muriel Mining, smashing the sacred cemetery located in the Rica area, where doctors only can enter Jaibaná.

This is history: The May 4, 2000 due to operating in the area three (3) members of the community of high guava disappeared, missing are: Rubiano Reguina 65 bariquin Pablo Emilio Domico 45, Domico Blancaina 16 years. In the same operations eight (8) Indian drums were burned, and bananas, food, holy vessels and livestock were stolen. On June 22, 2007, the island's indigenous community was bombed in the protection of the river Murindó. On February 8, 2008 at 3:40 pm, the cemetery of the indigenous communities and Coredo Island was bombed.

In the area of La Rica one company and the military built huts and camps in which they remain placed. They installed safety devices and told the indigenous land owners they could not travel on it. These soldiers provide security to the concessionaire, ignoring the ancestral rights of indigenous and black Colombians and putting at risk the fundamental rights of these communities.

Terrified by the situation and the serious threat that hangs over them, Embera Katío makes an urgent appeal asking for national and international support to end the militarization of their territories and prevent forced displacement.

Please visit our web page where you will find a sample letter that can be sent automatically to the Colombian authorities and reflects the requirements of the Embera Katío.

Help us distribute this information widely.

Translated from the Portuguese version from the Spanish by: