A Russian online surfer posted a very curious video on the Internet which the man made with his cell phone camera on March 29, several minutes after the horrific terrorist attacks in the Moscow metro. 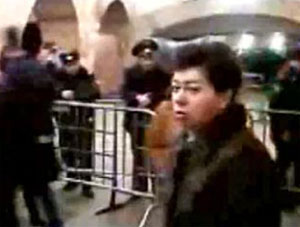 The VIDEO, made during the first minutes after the explosion at Lubyanka station, was aired by Russia Today channel. On the 25th second of the clip one can see a woman which bears a striking resemblance to the shakhid bomber who blew up her bomb at Park Kultury station.

Moscow law-enforcement agencies exposed shocking photos of the body fragments of the two suicide bombers. Someone compared the photos with the video and suggested that the woman in the clip could probably be the second bomber, who later exploded herself at Park Kultury station.

It is not ruled out, though, that the attentive surfer is wrong. The bomber, who looks like the woman in the video, blew up the bomb at Lubyanka, not Park Kultury. She could not be filmed after the first terrorist act because she was already dead at the moment when the video was being made.

An eye-witness made the video on her cell phone camera and then sent it to First Channel of the Russian television. Afterwards, the video was sent to Russia Today.

The video was made on Kuznetsky Most station, which is adjacent to Lubyanka, the site of the first explosion. The video shows the moments during the first minutes after the tragedy. It is about 8:00 a.m., people on the station are in panic. The woman in the picture is simply standing on the station and then leaving slowly.

The woman probably made sure that the first explosion had occurred, so she took a train and went to Park Kultury, where the next explosion happened 40 minutes later.

Forensic specialists are currently analyzing the video. They compared the fragments of the terrorist’s body with the image shown on the video. The nose, the lips, the forehead, the shape of face, the color and shape of hair, the eyes and the distance between them look identical, they said.

It is also possible that the video depicted a commuter who incidentally found herself in the subway at the moment, when an eye-witness was filming. Experts also said that the terrorist who blew herself at Park Kultury was young – she was about 20 years of age. The woman in the video looks much older – around 40.