Many Muscovites still shudder at the thought that they have to use the metro twice a day: to go to work in the morning and then back home in the evening. Psychologists say that it is a normal phenomenon, and the feeling of anxiety will pass very soon. At present moment, it is much more important to prevent the growing aggression in the Russian society, specialists say. 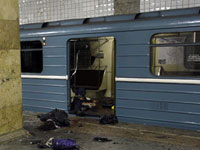 Many Moscow-based bloggers continue to panic and write on their pages that suicide bombers were planning more terrorist acts during the Holy Week before Easter. Someone wrote that Moscow law-enforcement agencies had received information about 12 suicide bombers in the city.

The metro was not packed on Tuesday morning, the next day after the bombings. Many preferred to drive their own cars or use the ground transport. However, it goes without saying that the Muscovites are not going to stop riding the metro.

“It’s scary, of course, but we have to live on. If I travel from one place to another by the metro, it will take 15 minutes. If I take a bus for the same route, it will be a two or even a three-hour journey,” a man said.

Psychologists say that most people will forget the tragedy in one or two weeks. Stress-resistant individuals will get rid of the anxious feeling already in several days, the Noviye Izvestia newspaper wrote.

Many commuters had fear in their eyes yesterday. They would give suspicious looks to other passengers in the metro, especially to Muslim-looking individuals. Many others did not seem to be concerned about anything. They were reading or listening to the music.

A lot of people preferred to take a day off and stay at home to calm down.

In the meantime, investigators are working to identify the two females who blew up their bombs on Lubyanka and Park Kultury stations, the Komsomolskaya Pravda newspaper wrote.

“One of the women has fair hair, she is in her forties. The other one is a brunette. She looks very young, she was not even 20. Both of them were carrying bags. Most likely, the bags were stuffed with explosives. We believe that the young bomber was a mentally unbalanced person from birth.

“The terrorists had two associates. One of them was a young woman. She looked 25. The other one was older – 35-40 years of age. Both of them are of Slavic appearance,” an investigator said.

The two suicide bombers most likely arrived in Moscow from the republic of Ingushetia. The republic’s president ordered to check gunmen’s families in an attempt to identify the Moscow bombers.

Ramzan Kadyrov, the President of Chechnya, stated that he would fight against terrorists until they are eliminated.

“It is impossible to root out the problem verbally. The terrorists must be isolated from the society. If they show resistance, they must be destroyed ruthlessly. Terrorists want to shed people’s blood, sow panic and paralyze the state,” he said.