Raul Reyes, Ivan Rios and Manuel Marulanda: Living in the Memory and the Struggle of the People! 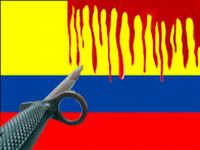 Raul Reyes, Ivan Rios and Manuel Marulanda: Living in the Memory and the Struggle of the People!

The month of March 2008 has a significant, large and deep sorrow for the insurgency in Colombia, to the revolutionary forces in Latin America and the world. This month marks the anniversary of the deaths of Commander Raúl Reyes, Iván Ríos and Manuel Marulanda Vélez. Raul was killed on March 1, after a bombing undertaken against his guerrilla camp located in Angostura, in the area of Putumayo. The bombing also caused the death of another twenty-four people, including five Mexican students who were in that location.

Lucía Morett was the only survivor of this group of students. Currently, she is pursued by the Colombian government, narco-paramilitary and representatives of the Ecuadorian courts, which are trying to criminalize them for being in the guerrilla camp of Raúl.

The Colombian security forces were in charge of the development and implementation of "Operation Phoenix," which was backed by military forces and American and Israeli intelligence. Members of the intelligence services of the army and police of Ecuador also contributed to infiltrate and then establish the precise location of the camp of the commander of FARC-EP. Police Maj. Manuel Silva and army colonel Mario Pazmiño were key figures in the task of working directly with the services of Colombian police investigations, receiving aid sectors from the Ecuadorian State.

Brutality has characterized this action, and was emphasized positively in the media industry of Colombia, and at the same time, they were delighted with the morbid display of photographs of Raul Reyes killed. Juan Manuel Santos, former Colombian defense minister, sported a macabre smile to break the news, showing the corpse of Raúl as a trophy of war.

However, without an opportunity to recover from this pain, the Colombian insurgency was finding out about the murder of Commander Iván Ríos, a member of the Secretariat of FARC-EP, on March 3, 2008. Ivan was victimized by Pedro Pablo Montoya, alias "Rojas", a cowardly man who, blinded by the money and "benefits" that the democratic security policy of Uribe offered to the killers and betrayers of the Colombian people, fired a shot to the head , as well as to his companion while they were sleeping in their camp. After shooting them, they cut off the hands of Rios to bring in as evidence to the Colombian military, in order to receive the reward of 5 million pesos that had been offered.

Once again, Uribe and Santos Padilla could not hide their satisfaction at this front face new blow against FARC-EP. The declarations of these mobsters to the press were given one after another, showing an excessive euphoria, saying that the defeat of FARC was a matter of little time.

The ecstasy of the narco-paramilitary regime of Álvaro Uribe Vélez reached its climax when, in May, FARC-EP confirmed the death of its commander in chief, Manuel Marulanda Velez, 78, on the 26th of March 2008, the result of a cardiac arrest. Encouraged by the information, the criminal Juan Manuel Santos gave instructions to the Colombian military to seek the body of Marulanda, offering a multi-million dollar sum of money to those who deliver information about its location.

These days were very difficult and very sad for the guerrillas of FARC-EP. However, despite the media campaign unleashed by the propaganda of Uribe, who emphasized that the insurgency was disorganized and demoralized, the Colombian fighters have not lost the way, as they traced their origins to fight in favor of the construction of a New Colombia. There was the need to take the necessary measures to stayafloat in the face of setbacks and hardships suffered which emerged as the logical outcome of the war involving the Colombian people, a consequence of the criminal policy of the oligarchy in this country and of U.S. imperialism. Commander Alfonso Cano was appointed as the new leader of FARC-EP.

What happened in that fateful month of March in the year 2008 for the insurgency in Colombia, and so for all revolutionaries, cannot be remembered with melancholy and sentimentality alone, but also on the basis of that which leads to transformative action against the prevailing system and the existing order. Because that is precisely what those holding power intend to achieve in any number of mechanisms at their disposal for staging, among which is subjugation, through fear of death and of what happened in past situations that had negative consequences for the revolutionary organizations and their members.

The revolutionary Basque Iñaki Gil de San Vicente said that "a people only live when they keep alive the people who died so that this people could live." It is not enough, then to remember our heroines and our heroes on each anniversary of their death or simply to act in their honor on the dates on which they died. This will only lead to mummification or petrification of their actions, their thoughts. The memories are kept too sterile sponsored by those who have the power to take advantage of these moments in order to empty the vitality of the dead revolutionary fighters or to continue denigrating them or tarnishing their rebellious image. As it was done with Che for 43 years.

"People live on in the measure that their memory is in the present, as in action and as in practical, and not a mere rotted remembrance between books" expressed Iñaki. He adds that a people can only live "if they are able to keep on in the streets, in actions and demonstrations in the contributions of those who fought and died, but did not hesitate to address the main risks to maintain their claims for themselves and future generations. Because memory is not only a thing of the past, but a loaded gun for the future, an instrument of freedom and action. "

Marx pointed out, the theses of Feuerbach, the need not only to contemplate the reality, but to transform it.

For him, it is essential to repeat the lessons, perhaps using caps or shirts with images of revolutionaries or put up posters of insurgent fighters on the doors or walls of homes and offices. But not only that.

Revolutionary practice needs to be nourished by an appropriate theoretical framework to understand reality, not only to explain or deepen their knowledge. The goal is also to seek to transform it, change it constantly, much more if this reality is misery and exploitation of the majority of the population.

However, it is not the individual action of one person alone, isolated from social groups. On the contrary. It is the people and their various organizations that must carry out the task of revolutionary political struggle against the enemies of mankind: imperialism, Zionism, the world bourgeoisie and the oligarchy, in order to achieve the construction of a society other than the capitalist.

In this process, people should not forget nor forgive those who have breached the pain and suffering. The criminal actions committed by people like Uribe, Santos Padilla, Bush and his military and paramilitary apparatus, cannot be relegated to the past, without being heeded in the memory of social vehicles. The purpose is to give impetus to the revolutionary struggle to put an end effectively to the political and criminal war of the oligarchy and imperialism. Likewise, we must keep alive every one of the achievements made by criminals that serve those in power in capitalist society, so that sooner orlater,they have to give an account to revolutionary courts.

Over the past fifty years, FARC-EP has shown with their practices and their fighters, like Raul, Ivan, and especially like the "old dear," Commander Manuel, to have been consistent with the principles they established to defend the people, showing in practice the firmness, the decisiveness, the anti-imperialism and revolutionary internationalism, now more vigorously, to have recovered the sword of combat of the Liberator Simón Bolívar.

In the second year after the assassination of Raúl Reyes and Iván Ríos and the natural death of the commander in chief, Manuel Marulanda Velez, revolutionaries must practice militant activist solidarity, an active front with FARC-EP. Fear and lameness cannot occupy the minds of those who struggle to build a different world than that required under the capitalist system.

The Colombian oligarchy and imperialism claim that the people of the world want to internalize their lies, repeated constantly about the Colombian insurgency.

It is sad to hear many personalities, supposedly progressive political and apparently left organizations, repeating the arguments of the propaganda of the Colombian oligarchy and imperialism against FARC-EP. These people and these movements have never been "next to the suffering people" in the words of Che, and deserve no consideration from the people fighting against their enemies, their exploiters.

There is no doubt that fascist propaganda has a powerful effect also in much of the population who are daily being intoxicated with lies about the Colombian guerrilla movement.

Therefore it is vital to dismantle this sort of speech and let people know the truth, in the different areas, and the reality about the Colombian insurgency. Winning supremacy over the liars, oligarchs and imperialists is the fundamental task of revolutionaries. The right has made that very clear. Therefore, Uribe and the puppet Gabriel Silva, the current Minister of Defense of Colombia, gave instructions to their embassies to launch an aggressive campaign aimed at denigrating/blackening FARC-EP. This took place shortly after being shown in an Argentinian documentary "FARC-EP: a century of insurgency," one with FARC in its true dimension, as a popular force, a political and military force who serves the poor.

Silence, remaining hidden or sitting comfortably in front of a computer in an office is not worthy of those who fight for a better world. Solidarity and support to the insurgency in Colombia, despite the knowledge of the risks it implies, is the product of the persecution unleashed by the narco-paramilitary regime headed by Uribe, it has to be a live voice, as was done with the Vietnamese and Algerian revolutionaries and how is done with the Palestinian people, victims of the most bestial crimes by the Zionist state of Israel.

This solidarity must also be expressed with those who are criminalized for denouncing violations of human rights committed by the fascist-Colombian regime and defend the revolutionary insurgency, such as in the cases of journalists Jorge Enrique Botero and Dick Emanuelsson, among other coherent intellectual and social communicators.

This is the best tribute to Manuel, Raúl, Iván, Martín Caballero, Efrain Guzman, just as to the revolutionaries that have been captured and confined in the Colombian or U.S. American jails for the crime of fighting for the construction of a New Colombia, as Sonia, Simón Trinidad or Iván Vargas.