The police of Spain investigate the brutal murder of a Russian woman, who lived in Barcelona working as an elite prostitute for several years. The gorgeous blonde was found in her own bed with her head smashed. 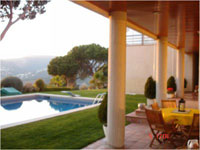 The woman’s body was found by one of her neighbors in the house. The building, where the crime was committed, is located in Barcelona’s prestigious neighborhood on the sea coast, El Pais newspaper said.

The 30-year-old woman had been living in Barcelona for several years. She provided traditional Thai massage services in a night club nearby, but was virtually a prostitute. Her massage session cost from 70 to 240 euros.

Local residents knew the woman well. “She was beautiful and elegant, I did not even think that she was doing that, I mean, that she was a prostitute,” a shop assistant said. The man works in a furniture store in the same building, where the woman was murdered.

The tenants of the apartment building told the police that they had never had any problems with the Russian beauty. She lived quietly in a rented apartment.

The police originally believed that someone had killed the Russian to rob her, but they later changed their point of view. Investigation is underway.