Senator Jorge Enrique Robledo asked the Constitutional Court to declare the unconstitutionality of the treaty that allows the U.S. to use exclusively seven Colombian bases. Robledo made the request during the proceedings on the constitutional claim presented by a group of citizens.  According to Congressman from Polo, the agreement allowing the U.S. military presence in the country openly violates the Constitution because of its substance and form. 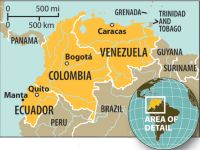 The first argument has to do with the background defect. The congressman said that the treaty violates national sovereignty because the installation of seven military bases allows the superpower to interfere in the internal affairs of Colombia. Robledo explained that the bases are a mechanism that would allow the United States to ensure that domestic policies are responsive to the interests of its monopoly, the fact that manifestly violates the right to self determination of the Colombian people. He further noted that in the Constitution there is no rule allowing a foreign troop presence in Colombia, as if there is one that enshrines sovereignty as a fundamental principle.

In its request, Senator Robledo also said that contrary to allegations made by the national government, the agreement signed with the United States is not an agreement, but a true simplified international treaty, which, as required by the Constitution, must be approved by the Colombian Congress. The Polo Senator supports this assertion on the fact that never before in history had Colombia been forced by the United States to allow use and install seven military bases in the country, which is why the alleged agreement is a treaty that was not approved by Congress, a formal defect that makes it unconstitutional.

The senator recalled the concept from Polo State Council where it is abundantly clear that Congress must approve the treaty, and said the government failed to evade the control process of the Constitutional Court because the defects are manifest.

Robledo reiterated his opposition to the decision of Álvaro Uribe Vélez to allow a military superpower to install seven military bases in Colombia, which he called the worst decision in the history of Colombia.