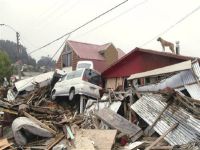 If it was just a movie, not a tragedy, the comment of a fellow journalist would be justified, encountered in the lobby of a hotel in the Chilean capital. "Frankly, I expected more." Perhaps it is a mark of this century's media: it is measured by the tragedy's capacity to generate loud and public headlines to fill the spaces between commercials.

For the headline, then, is as follows: Santiago survived! Bruised, sure. The airport is closed, the subway too, highway bridges and some older buildings have collapsed, several services were paralyzed.

But at the time of the writing of this text, less than 48 hours after the earthquake, the city does not seem as though it experienced the biggest earthquake in 50 years. Yes, there are drawbacks to remind us of how dependent we have become on the conveniences of modern life, such as the Internet, cell phone and hot water.

For the hotel executives where I am staying, very close to the presidential palace of La Moneda, there is no hot water for baths - the gas supply remains cut - and the elevators are not working. The top seven flights of stairs may seem traumatic for those who just completed a trip of 8 hours' drive from Mendoza, Argentina, the only way to reach the Chilean capital.

But we cannot forget that less than 48 hours ago, this city was shaken by an earthquake measuring 8.8 on the Richter scale. And Santiago works even in fits.

Talking to a Brazilian tourist, unwittingly he explained the reason for the "success" of Santiago, which may seem tragic at first: the building of the hotel we are staying in shook. That is exactly what is expected of a well constructed building in a region subject to earthquakes, that it rattles, but it does not collapse.

I leave Santiago for a moment and mentally I transport myself to Tokyo, where I did a big story in 2001 and was next to a high building that incorporated giant springs to its structure, just to give it more flexibility during tremors. It is the famous one, it swings, but does not fall.

I have not had time to go underground to see if the building where I stay now has springs in the structure, due to the fact that Chilean law was enhanced after the great earthquake of 1985. In the last ten years all buildings erected in Chile have to meet international standards to make them less vulnerable to tremors.

That is not an absolute guarantee. I was in the rubble of one of the most modern highways of Santiago, which connects downtown to the international airport, and it came down like a house of cards. A Chilean protested: "We pay expensive tolls to walk this path and look urban. He only says that because he does not know "things" for which we Brazilians pay tolls.

But this tragic episode is the exception that proves the rule: Santiago held up surprisingly well.

Perhaps it may be a result of the inevitable comparisons to what we saw in Haiti, although the story of "comparing" earthquakes has turned into a bizarre sort of gymkhana.

In the case of Port au Prince, the epicenter was just over 10 km; in Santiago, more than 300. Yet it is undeniable that the damage in the two cities were directly proportional to the quality of the buildings and the structure of local governments. The weaker the state, the greater the consequences of natural phenomena like floods and earthquakes and less capacity to deal with them.

But if we move in the way of comparison, the Haitians did not come out all bad. I remember well when colleagues, in a demonstration perhaps unconscious of racism, were predicting that the world would come down in Port au Prince, on account of gangs that would provoke violent withdrawals. They were days until an episode of its kind actually happened in Port au Prince.

But here, in Concepción, the biggest city of the region actually destroyed by the Saturday earthquake, hardly 24 hours went by and a crowd attacked the warehouses of a supermarket.