An earthquake with a preliminary magnitude of 8.8 struck 99 kilometres southwest of the Chilean town of Talca and 117 kilometres northeast from Concepcion in central Chile at around 3:34 a.m. local time. A tsunami warning has also been made for much of the Pacific as far away as Japan and Hawaii. The death toll from early reports is 78, and it is feared that number will rise as daylight reveals the damage. Buildings shook for 10 to 30 seconds. 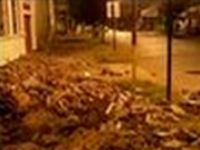 President Michelle Bachelet called on people to remain calm and contact authorities if they needed help. She said there were areas of the country where communications were down and teams were working to restore them. There are electric power outages, telephone outages and extreme difficulty with communication at this point.

According to the US Geological Survey, the earthquake struck at a depth of about 35 km.

Chile has had many strong earthquakes. It is the scene of the largest instrument recorded earthquake ever, 9.5, in May 1960. This magnitude 9.5 earthquake killed 1655 people in southern Chile and unleashed a tsunami that crossed the Pacific, killing 61 people in Hawaii, Japan, and the Philippines.