The news about the arrest of one of the Taliban leaders, Mullah Abdul Ghani Baradar may mark a turning point in the anti-terrorist operation in Afghanistan. 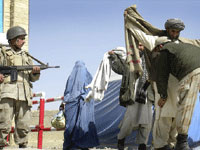 Mullah Baradar is considered to be No.2 figure in the Taliban after the movement’s spiritual leader Mullah Omar. The operation to seize the leader was conducted by Pakistani special services and CIA agents in Karachi, Pakistan, The New York Times wrote.

Strangely enough, the news about Baradar’s arrest coincided with the offensive conducted by the international coalition forces in southern provinces of Afghanistan.

Taliban spokesman Zabiullah Mujahid said that the rumor about the arrest of Mullah Baradar had been made up by the West to undermine Talibs’ resistance to the offensive of occupant forces in the south of Afghanistan.

Mullah Baradar had been the head of one of the three councils of the Taliban leaders since 2007. He was in charge of military actions, which the Taliban conducted against the international coalition in Afghanistan’s most dangerous provinces.

If the information about the capture of Talib No.2 is confirmed, it may seriously affect the morale of Taliban fighters in the war-torn nation.

Mullah Baradar was one of those who initiated the mine war in Afghanistan. US intelligence believes that he had successfully practiced the tactic of “planting flowers” – installing hand-made explosives on roadsides.

Baradar served as deputy defense minister in the Taliban government, which US troops overthrew in 2001. Mullah Baradar was in charge of the planning of military operations, appointing commanders and distributing funds. He believed that there was no point for Talibs to compete with the powerful US Army. He was a proponent of guerrilla warfare.

“The biggest problem with the Americans is that they attacked our country. They offer us negotiations in a hope that Mujahideeds will give up, but we do not see any profit from such negotiations either for Afghanistan and Islam,” he said in an interview to Western journalists.

Baradar reportedly penned a reference book for Taliban fighters. The book recommended to avoid victims among civilians and use suicide bombers in terrorist attacks as seldom as possible.

In the meantime, 12 civilians were killed in a recent operation conducted by coalition troops in the south of Afghanistan. The number of refugees continues to grow.

Now that Taliban figure No.2 has been captured, US military officials hope that it will be easier for them to find moderate Talibs for negotiations.