With three successful tests of the Agni-III long-range ballistic missile in their favor today, India is considered ready for larger endeavors, to be willing to manufacture the intercontinental version of the weapon, with nuclear capability. This release is a step in the manufacture of Agni-V, assured the director of the Center for Research and Development for Defense (DRDO), VK Saraswat, quoted Monday by the daily The Hindu, in allusion to the test of Agni-III launched yesterday on an island in the Bay of Bengal. 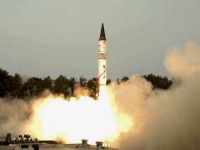 According to the diary, the DRDO scientists believe that the success achieved with the intermediate range missile, capable of carrying a nuclear warhead of 1.5 tons, demonstrates the maturity of the deterrent program in this South Asian country.

Given that India is committed to not be the first to use nuclear weapons in armed conflicts, a strong response capability is then expected, in turn, said, W. Selvamurthy, another director of the DRDO.

Unlike the Agni-III, which can hit a target located three thousand kilometers away, the Agni-V will take several nuclear warheads to almost twice that distance.

Although both are propelled by solid fuel, the first missile is two-parts, while the second will have a third, and having the ability to fight anti-missile systems.

The range of the Agni ballistic missile (Fire in Sanskrit) developed by the Indian Ministry of Defense includes version I, between 700 and 800 km range and version II, which can reach up to 1,500 kilometers.

There will be no version IV, since, with the production of Agni-V India enters directly into a select group of countries with intercontinental ballistic missiles, built by the United States, Russia, China and France.