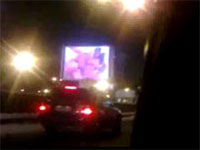 “The perpetrator skillfully covered up his traces on the Internet, but our agents determined his whereabouts in the city of Novorossiisk,” a law-enforcement official said.

The suspect, a 40-year-old unemployed man, a resident of Novorossiisk, has a criminal record. He repeatedly hacked other people’s computers simply out of curiosity to master his skills.

“He used a hostile program to hack the website of a company located in Chechnya. Afterwards, he penetrated into the server responsible for the operation of the screen in Moscow,” an official said.

“The hacker replaced one of the commercial video files on the playlist with an adult video. He said that he decided to hack a resource in Chechnya because he was certain that the police would never go there for investigation,” officials said.

“Employees of the company said that they did not even know that their official website had been hacked. Our agents collected the required information and left to Russia’s Krasnodar region, where the hacker was detected and arrested.”