Crisis in Greece: "The Rich Should Pay for the Crisis" 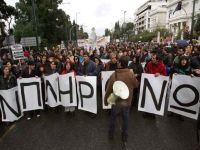 Crisis in Greece: "The Rich Should Pay for the Crisis"

This was the cry that went through the streets of Athens, capital of Greece, on Wednesday (10). The city was occupied by thousands of workers including public sector workers, which paralyzed services for 24 hours. A large demonstration was held against the economic measures announced by the neoliberal government in response to the economic crisis plaguing the country and so-called "euro zone."

Affected by the global crisis of capitalism, Greece has accumulated a debt approaching 113% of its GDP and a deficit (from 12.7% in 2010), four times the narrow limit (3%) proposed by the European Union. With European banks and investors remaining wary of lending money, interest rates are high and with growing doubts about the ability to pay or refinance debt, the country seems on the threshold of a moratorium. That, combined with fiscal disturbances in other countries of the old continent (such as Portugal, Spain and Italy), shook the credibility of the euro and depressed capital markets around the world in recent days.

Under pressure from creditors and the major European powers, especially Germany (its largest creditor), the government led by Prime Minister George Papandreou will impose tough measures to contain public spending, focused primarily on reduction of rights and conquests of the bureaucracy.

The package of evil released by the Greek authorities includes the reduction in real wages of workers and employees, the payment of bonuses, raising the minimum age for entitlement to retirement to 63 years, increasing fuel prices, hiring freezes and the removal of subsidies.

The operation of schools, courts and government offices was affected by the protests. The stoppage of the air traffic controllers forced the cancellation of domestic and international flights.

A march was carried out to the Ministry of Labor which lasted 90 minutes. The government mounted a strong repressive apparatus and the police dispersed protesters gathered in the capital with tear gas. The Greek Communist Party also organized an action outside parliament against the proposed cuts. Landowners are also protesting for more subsidies to agriculture.

The European Union rejected the ill-fated "bailout" suggested by the IMF (International Monetary Fund), whose disastrous effects in the "Third World" are known worldwide. However, the recipe recommended to Greece by the great European bourgeoisie is not much different. It has the same class character.

In essence, the recipe for Papandreou to overcome the fiscal crisis is driven by the interest of preserving the investments and profits of the financial system. He promises to reduce the deficit from 12.7% to less than 3% over the next three years, cutting the flesh of the working class and reducing subsidies to farmers. In short, tightening up the civil government to guarantee funds to honor the payment of interest on public debt. It is a Robin Hood operation in reverse, which steals income of the poor to feed the greed of the rich and where the state becomes a docile instrument of the financial oligarchy.

The recipe is old and does not differ from those that were imposed in the past on countries like Brazil by the IMF over the so-called debt crisis, which cost decades of development and an intolerable depreciation of the workforce. In short, the Greek government and the European Union proposed that the working class pay for the crisis of global capitalism, to ensure the privileges for international banking, which is by far the most responsible for the current financial turmoil.

The reaction on the streets, led by the trade union movement and progressive political forces, gives us a measure of the class struggle that sparked the crisis, highlighting the clash of antagonistic interests between capital and labor. The working class wants to reverse the logic of the capitalist game and this case clearly illustrates the slogan that echoed Wednesday in the center of the historic Greek capital: "The rich should pay for the crisis." In practice, this means preserving social rights and achievements and at the same time, transfer the losses from the crisis to its real promoters, the big capitalists, especially the parasites who feed the public debt. A moratorium may be the price to pay in this case, but it is a tolerable and fairer cost from the social point of view.