Woman's Mummified Body Found in Her Apartment in Moscow

A mummified body of a woman was found in the east of Moscow. The body of the woman, aged 70, remained in her apartment for four months, a source at the Moscow law-enforcement agencies said. 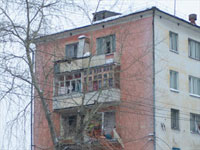 Woman's Mummified Body Found in Her Apartment in Moscow

“The mummified body of an elderly woman was found in her apartment on Marshall Rokossovsky Street. The woman had been dead for more than four months,” the source said.

It is not the first time when the police find mummified bodies in apartments.

Dwellers of an apartment building in the city of Tula, central Russia, were horrified to learn of a discovery made in one of the apartments in 2007. The mummified body of a tenant was found in a sitting position in the kitchen of his apartment. The male had been dead for six years, Pravda.Ru reports.

The grisly discovery was made by workers of a housing management office as they were making their rounds in the apartments of those who owed large sums in unpaid utilities bills. According to a spokesperson for the prosecutor’s office, the death of the man identified as Vladimir Ledenev did not entail any investigation since the police found no evidence indicating that the victim had died a violent death. Likewise, sanitation authorities refused to carry out decontamination of the apartment despite a request filed by a local police station.