Smugglers can be very inventive when they need to ship exotic goods across the border. However, it may often happen that artful tricks do not bring any result to illicit entrepreneurs. That was the case with a Russian woman, who tried to bring 50 parrots from China to Russia. 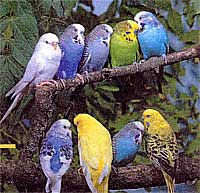 The woman was arrested at an international checkpoint on the border between Russia and China, customs officers said. However, it was not the officers, but the parrots, who did most of the work.

To take the birds across the border, the woman put on a special apron underneath her dress. She hid the birds is large special pockets on the apron.

The birds obviously disliked such an environment. They woke up in stuffy pockets and began to loudly express their dissatisfaction. Customs officers paid attention to strange sounds coming from underneath the woman’s clothing.

A similar story took place at the airport of Wellington, New Zealand. A German man was arrested and jailed after he tried to smuggle 44 geckos in his underpants. The little lizards were packed in a special bag, but officers paid attention to a suspicious bulge on the man’s trousers. One gecko costs $2,800 in Europe.

The unlucky smuggler will have to spend 14 weeks in jail and pay the fine of $3,500.