Haiti and Our Militarization Each Day

Colombia with seven military bases. Honduras under a military coup legitimized by an election without legality. The Fourth Fleet reactivated on 1 July 2008, after more than 50 years off and whose function is to patrol the South Atlantic and now the growing process of militarization of humanitarian aid in Haiti. 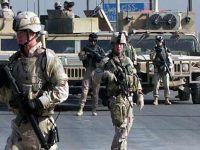 Haiti and Our Militarization Each Day

The last 13th of January, the world woke up with a disaster of staggering dimensions: 1 / 3 the population of a country, three million people were homeless, more than 100 people dead, about 40 thousand pregnant women without any prospect of a roof to shelter their children. The international community is moving at a slow pace in order to respond to this tragedy: the earthquake of January 12 in Haiti.

How could distant China send food that arrives faster than from the U.S., which is less than an hour's flight from Port au Prince? How to explain that more than two thousand Marines are the first "property" of the U.S. to contribute to this Caribbean island?

Cuba, Venezuela and even the Caribbean Community (CARICOM) immediately send their medical staff to disasters of this size. The Caricom plane could not land at the Toussaint Louverture Airport, as well as a Brazilian Air Force plane. They had to land at Santo Domingo, Dominican Republic, since the U.S. Marines took control of Haiti’s airport and port.

It is the question: how can they close ports and airports after a tragedy of this dimension while the international community is mobilizing to send medicine, food and clothing? Closing ports and airports makes up a strategy of war does it not? So we always knew.

Since 2004, Haiti is occupied by troops of the UN through the Stabilization Mission in Haiti - MINUSTAH. Since then, several national and international organizations have positioned themselves for the withdrawal of troops. After staying in the country for six years, they have done little for the reconstruction of Haiti.

We know that the military command of this mission in charge is in Brazil. From statements conveyed in the media, we learned that Brazilian troops in Haiti are doing a training camp. As I write textbooks, these trainings serve the process of militarization of several suburbs. No wonder that these troops are being trained in the slums of Rio de Janeiro. They go to Haiti and then return to the city of Rio, as was the case in the occupation of Morro da Providencia by the National Guard in 2008.

At this time of disaster, we ask: what role does MINUSTAH have? Where were the soldiers in the early days of tragedy? The reports coming out of Haiti are that the poor were absolutely deserted.

With the growing U.S. role in the process of militarization of humanitarian aid in Haiti, we ask ourselves why does President Obama, finding little, send troops that can reach the number of 14 thousand and mobilize Bill Clinton and George W. Bush to be the coordinators of the effort to rebuild Haiti?

How could it be that a country so small and so poor in the Caribbean, would have two former presidents of a major war power in the world - the U.S. - designated to care for its reconstruction? What is behind all this? In our opinion, these are strategies of various types of militarization of our countries in the Americas. We are watching live and in color, on behalf of humanitarian aid, as a country is militarily occupied after a monumental catastrophe.

Thus, we must strengthen the cry for withdrawal of troops from Haiti. The troops do not help with humanitarian aid. The Haitian people, through their organizations and social movements, must be supported so that their voice will talk in the process of reconstruction.

Since last Monday (18/01), the National Front of Solidarity with the Haitian people was established in Brazil, made up of social movements in the countryside and city, unions, churches, societies, the black movement, women, in short, a large spectrum of organizations of the Brazilian left. The central task is to work together to help direct Haitian social organizations and effectuate the withdrawal of troops. Much work lies ahead. The reconstruction of Haiti will be slow. But let us not forget the historic debt that we all have with this country. Haiti was the first nation in the world to abolish slavery. Is it that your sin?

By Sandra Quintela, economist, a member of the Institute of Alternative Policies for the Southern Cone (PACS) / Jubilee South Network