Pregnant Woman Goes out to Buy Apples, but Dies in Elevator

A rescue service of Ukraine’s Zaporozhye region received an emergency call on January 26. It was reported that a young woman had stuck between the doors of the elevator in the apartment building where she lived. 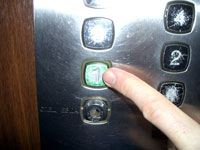 Pregnant Woman Goes out to Buy Apples, but Dies in Elevator

“When we arrived, medics, policemen and forensic experts were already there. Unfortunately, the woman was dead. He leg was stuck between the doors of the elevator cage and the elevator shaft. For some reason the elevator went up at the moment after the woman made only one step inside. Her foot was still outside when the doors closed,” a rescuer said.

The woman died because of internal bleeding and pain shock, forensic exporters concluded. The woman was five months pregnant.

An official representing local authorities said that the elevator, where the accident occurred, had been repaired in 2004 and then certified twice in 2006 and 2008. The next inspection was planned for the spring of 2010.

“I knew that woman, she was a wonderful person. She died, her husband lost his wife and the unborn child at once. They got married only 6 months ago. She only went out to buy some apples,” a woman living in the same building said.