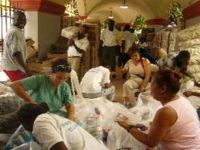 By Dave Lindorff, in Rebelión

In the critical early days after the earthquake that struck Haiti, only two North American news agencies reported the rapid Cuban response to the crisis. One was Fox News, which wrongly stated that the Cubans were absent from the list of neighboring Caribbean countries that had provided assistance.

The other half was The Christian Science Monitor (a respected news agency that recently closed its print edition), which reported, correctly, that Cuba sent 30 doctors to Haiti.

The Christian Science Monitor, in a second paper, citing Laurence Korb, a former deputy defense secretary and current member of the Center for American Progress, said that the U.S., who led relief efforts in Haiti should "think about utilizing the knowledge of neighboring Cuba." He also noted that they "have some of the best doctors in the world - we should try sending them to Haiti."

With regard to other media in the U.S., Cuba is simply ignored. In fact, they omitted and failed to inform that Cuba already had about 400 doctors, paramedics and other health professionals sent to Haiti to assist in day-to-day health needs of the poorest country in the Americas, and that these professionals were the first to respond to the disaster by erecting a hospital, just next to the main hospital in Port au Prince that was toppled by the earthquake, as well as a second hospital in another part of town.

Far from "doing nothing" after the disaster, as the propaganda wing Fox-TV, Cuba has been one of the countries that responded more efficiently and crucially in this crisis, because even before the earthquake they had created a medical infrastructure that was able to mobilize quickly to immediately begin treating the victims.

As might be expected, the North American emergency response has focused primarily, at least in terms of personnel and money, to send the enormously expensive and inefficient military machine - a fleet of aircraft and an aircraft carrier - a factor that should be taken into account when considering the $100 million that the Obama administration says it has designated for emergency aid to Haiti.

Given that the cost of operating an aircraft carrier, including crew, is approximately $ 2 million a day, only to send a company to Haiti for two weeks, will consume one quarter of the promised North American aid and although many of the soldiers sent in to work certainly helps, distributing and guarding supplies, the long history of brutal military / colonial control of Haiti, inevitably leads to fear that other soldiers have the task of ensuring the survival and control of the pro-US elite Haitian political parasites.

Moreover, the U.S. has ignored the day-to-day ongoing humanitarian crisis in Haiti, while Cuba has done the job of providing basic health care.

Not that it was difficult to find Cubans in Port au Prince. Democracy Now! had a report, as did the magazine Noticias de Cuba, with headquarters in Washington. What happens is that after the proud Communist good deeds of a poor country to the Americans this is not something that the corporate media in this country are willing to do.