The international community is trying to prevent an urban disaster becoming a rural catastrophe, planning to help the new influx of city-dwellers to the countryside establish themselves. Ban Ki-Moon praises the resilience of the Haitian population. After all, in how many countries would people be singing in the streets and playing musical instruments after what they have been through? 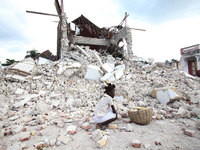 As the Government in Haiti launches its program to relocate half a million people in the countryside, the United Nations Organization is trying to make sure the onset of the Spring planting season is not affected negatively by the earthquake which devastated a third of the country 12 days ago.

The UN Food and Agricultural Organization is giving priority to farmers with seeds, fertilizers, feed for animals, vaccines and tools, making sure that the exodus from the city to the countryside is met with the right conditions for the planting season in March.

The UN Secretary-General Ban Ki-Moon stated today that he is convinced that the Haitians will overcome this tragedy due to their amazing resilience. After all how many other peoples would be sitting around in tent cities singing and playing musical instruments?

“Haitians are people of strong faith, which sustains and comforts them during this difficult time,” stated Ban Ki-Moon, remembering that “this is the gravest tragedy in the history of the Organization”.

Defending the UNO, Ban Ki-Moon stated that “Our mission was up and running again within hours of the disaster, despite the fact that some of those working had lost close family members, friends and colleagues,” remembering the tens of UN personnel (nearly 50) who had lost their lives or who are still missing.

On Friday the efforts of the international community were finally visible nationwide and not just in the capital city. Various UN agencies fanned out around the affected area (involving around a third of the country’s population) reaching villages and towns which had until now been looking after themselves.

Former banks, houses, hospitals and universities are today piles of rubble. Yet all of those who have witnessed the amazing resilience of the Haitian population have no doubt that this society will rise up again and surpass the horrific trials of the last two weeks.

Maybe this time, with the international community helping Haiti and not holding it back, as was the case right since the declaration of independence in 1801, this country can become proud of itself.

Those on the ground applaud the restraint and resilience of the Haitian people. After what they have been through, for centuries, there can be no doubt that this is a special people, with special qualities and tomorrow these will be the cornerstones of nation-building.

Let us hope that from now on the international community works towards fostering this process and not hindering it, as has been the case to date.