Man Builds Himself House of Tombstones in Ukraine

The police of Ukraine arrested a resident of the autonomous Republic of Crimea on suspicion of vandalism. The man would steal marble tomb stones to use them as construction material for his house. 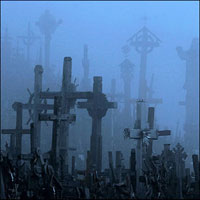 Man Builds Himself House of Tombstones in Ukraine

The 42-year old vandal was arrested in the city of Simferopol where he lived in his own house number 13. During the search of his house and yard, the police found 38 marble tomb stones of different size and color, Interfax reports.

At the end of 2009, a regional police department of Simferopol started recieving claims from local residents regarding the stealing of marble tomb stones from the territory of Simferopol city cemetery Abdal. The police conducted investigation and found three people who participated in the crime.

In the beginning of 2010, the main suspect was arrested. The arrested confessed that the tomb stones were brought from the city cemetery and used as construction materials.

The accomplices of the cemetery thief were found and arrested as well. One of them, age 40, is a resident of the city of Kerch, and the other one is a 38-year old homeless residing in Simferopol. The resident of Kerch was convicted of theft earlier.

Currently the police are trying to find out the actual number of stolen tomb stones.