Circus Tigers and Lions Suffocate in Trucks When Traveling in Siberia

A real tragedy occurred in Yakutia on the eve of the Year of the Tiger. The Krasnodar-based circus Mechta (Dream) was travelling from the city of Neryungri in Yakutia to Yakutsk city. There were over 20 animals in the trucks, including the audience favorites - Bengal and Siberian tigers and a female African lion. 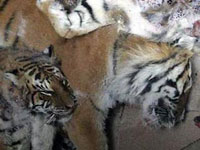 Circus Tigers and Lions Suffocate in Trucks When Traveling in Siberia

“The animal trainer who accompanied the truck with wild animals had a couple of drinks and fell asleep. Before he fell asleep, he turned on the heat in the trucks to keep the animals from freezing. When the cages were open, the poor animals were lying there with their bellies up. The only survivor was a Himalayan black bear who was later put on another truck,” the witnesses reported.

The circus employees called the police, and the dead animals were moved to the territory of the stationary circus.

“I have no idea how we will perform without the tigers,” said a circus employee, crying. “The male tigers Akbar and Azik had been with us for seven years. Females Vega and Santa were so quiet that we sometimes had to yell at them. Nora was moody. Khana was a great worker and the audience’s favorite. The female lion had been travelling with us for three years.”

The circus employed 26 animal actors including dogs, a bear, a monkey, a python and beautiful tigers. When during performances a tiger was lifted 5 meters above the arena, the entire audience would hold their breath. This was the scariest trick, but the animals did a great job. The circus had been travelling with this performance for nearly 8 years from one city to another.

“We will find out who is to blame for the animals’ death in a few days. Right now an investigation is being conducted and it is early to speak of the results,” said a representative of Yakutia Ministry of Internal Affairs.

While the police are looking for those guilty in the death of the eight cats, the director of the circus Vadim Tsurikov is not speaking with anyone and has not appeared in Yakutsk.

Representatives of Krasnodar stationary circus stated that this travelling circus had nothing to do with their organization: “We do not know why Mechta is travelling under our name, we never heard of them. Most likely they are just registered in Krasnodarsky Krai and travel all over the country.”

Krasnodar Veterinarian Department stated that they have never issued any permits to the organization.

The Prosecutor’s office provided no information regarding filing criminal charges in connection with cruelty to animals.

- July 2002. Rare snakes were to be sent from Novorossiysk to Krasnoyarsk by train. The reptiles were placed in a wrong train and were later found at Berdyaush-Suleya railway section. Most of them were dead.

- April 2005. A large batch of tropical butterflies was to be delivered to the Moscow Zoo. The shipping company failed to perform customs clearance and the insects were locked in a warehouse for several days. The containers with the butterflies were illegally opened and most of the insects died. Those who survived became disabled since they could not open their wings because of the difference in humidity.

- February 2009. Twenty camels were being transferred from Kalmykia to Bulgaria. At the Ukrainian border, the customs workers refused to let the camels through the customs because of African swine fever that was then raging in Russia. After a week of waiting, one of the camels died. Ukraine gave the camels the green light, but the trucks transferring the animals were stopped again at the Romanian border. Two days later another camel died.

- September 2009. Over four thousand exotic fish were to be delivered to the new aquarium in Sochi from China. The Sochi customs required the documents that the receiving party did not have. The fish were sent to a warehouse. After sitting in the heat for over 14 hours, only 200 fish survived. The aquarium lost nearly $500,000 on this deal.