Shocking revelations from Chechnya’s President, formerly a Chechen warlord who fought Russia, now an ally of Moscow, who categorically blames the West for fomenting instability in the Caucasus and accuses Washington and its allies of having ties with terrorism. 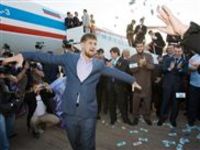 Describing himself as a modest man who would like to spend more time with his seven children and study Islam, Ramzan Kadyrov gave an hour-long interview to Reuters, in which he made the most shocking revelations about ties between the West and terrorism in the Caucasus.

The 33-year-old President of Chechnya, a former warlord who fought against the Russian forces, son of President Ahmad Kadyrov who was assassinated in 2004, has rebuilt the Republic of Chechnya, has crushed terrorist elements and has imposed Islamic law. However, he claims, the terrorist insurgency is far from defeated, due to the fact that they are supported by the West.

“The West is financing them I officially declare this: Those who destroyed the Soviet Union, those who want to destroy the Russian Federation, they are behind this”. He claimed that the number of terrorists is today very small, because “This year we destroyed a great many terrorists in Ingushetia, Daguestan and Chechnya”.

Regarding relations with the USA, he referred to the new approach followed by President Obama, considering that it would be positive if Washington and Moscow worked more closely together. “If not, we have a very strong politician of global stature – Vladimir Vladimirovich Putin. There is no-one like him on the world stage”.

“We need to attack”

Ramzan Kadyrov stated that “Russia needs a military strategy to resist the United States and other Western powers which are stoking disorder in the North Caucasus to destroy Russia. If they get control of the Caucasus, you could say they will get control of virtually all of Russia, because the Caucasus is our backbone”.

“The Russian government needs to work out a strategy. It needs to attack…Georgia, South Ossetia, Ukraine…all of this is Russia’s private affliction. Why should we always suffer if we can eradicate it for good? We are a great power, we have everything – an army, technology. We need to attack”.

An explosive interview with shocking declarations. After all, if there are Western links to Chechen terrorists then he should know. He used to be one. This is precisely why the election of President Obama by the people of the United States of America came at such a critical time and provides hope. The key word is “change”.

“Change” is what President Obama promised to deliver in the United States of America, in the way the country was governed and change is what is needed in Washington’s external policy. Until now, the notion remains that the White House merely dictates broad guidelines and occasionally becomes involved in formulating policy (Cheney and Rumsfeld in Afghanistan; Bush, Cheney and Rumsfeld in Iraq).

Meanwhile although the external face of Washington may be its Secretary of State, policy is executed on the ground by a myriad of agencies, NGOs and other “Organizations” acting under a plethora of names and controlled by cliques the White House is ignorant of.

Hence the turmoil and covering-up and skulduggery that led up to 9/11, where different agencies did what they wanted and the White House had no control at all. The sooner real change comes to Washington’s internal and external policies, the better. Then Russia would not need to “attack” or even consider it.