One of the passengers, who was injured in the terror attack against the Nevsky Express train on November 27, survived the previous attack in 2007 too. Natalia Novikova, a 35-year-old native of St. Petersburg, traveled from her city to Moscow on board Nevsky Express two years ago too. The woman is currently staying at an emergency unit of a hospital in St. Petersburg. Doctors are doing their best to improve the woman’s condition, Life News website reports. 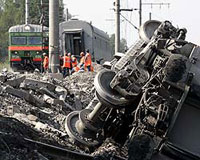 “Natalia has a complicated hip fracture. Her condition was estimated as severe, but the woman did her best to keep up a good spirit. Her 13-year-old daughter was supporting her mother as they were traveling in a ER vehicle from the Tver region to St. Petersburg. She will have to undergo a serious treatment, of course, but I think she will be able to wear stilettos already in spring,” a doctor said.

Novikova has been living between Moscow and St. Petersburg for several years already.

“She has her own business – she owns several shops in St. Petersburg. She has to use the route very often – she travels between the two capitals almost every weak,” Natalia’s husband Sergey said.

“Natalia was not injured much as a result of the attack in the summer of 2007. The woman only had scratches and bruises, but her nervous breakdown was very serious. She refused to take another train ride for a long time. She could not stand the sight of a train at all. She also wanted to change her occupation to avoid the frequent rides, but time gradually healed the wound, and she started traveling back and forth again,” the man added.

No one could even think that Natalia would have to survive the horror of the terrorist attack again. Natalia boarded the train on November 27 after she had concluded a very good business deal. The train blew up 2.5 hours later. The second carriage, where Natalia was staying, suffered most from the explosion: the carriage derailed and overturned. The accident happened when the train was traveling at the speed of 200 km/h. Twenty-six people were killed in the accident.