Half-Naked Black Prostitute Falls Out Of Window in Moscow

According to Interfax, Moscow police are investigating a battery case involving a 20-year old black prostitute who leaped out of a window of a building located in Moscow's Tekstilschiki district. 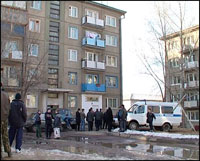 Half-Naked Black Prostitute Falls Out Of Window in Moscow

At 9:15AM on Friday, passers-by found a half-naked black girl in the yard of building 57 on Volgogradsky prospect, and called the emergency number.

“The woman suffered serious injuries including spinal compression fracture, pelvic fracture, and rib fractures. Doctors believe that some of the injuries were caused by beating, and not the fall,” a source told Interfax. The woman was sent to the city hospital #13.

The police confirmed that the apartment window the woman leaped through belongs to a co-producer of the band “Otpetye Moshenniki” (Incorrigible Swindlers) Yuriy Denisov.

“The police broke into the apartment and found the highly intoxicated owner. Denisov said that he had a party in his apartment where he got drunk and passed out. He had no recollection of what had happened. Most likely, one of the guests called the prostitute and then beat her up, which caused her leap through the window,” the source explained.

During the search of the apartment, the police found the passport of Timur Bartrutdinov, a resident of the popular TV show “Comedy Club.” The showman and other guests are wanted by the police.

A similar case took place in Moscow at the end of June. The body of a 23-year old female citizen of Nigeria was found at building 19/2 on Tashkentskaya Street. First it was believed that the woman committed suicide leaping through a window on the 13th floor. Later it turned out that the victim was a prostitute called by three young men who were celebrating army discharge. All three men were arrested on suspicion of murder.