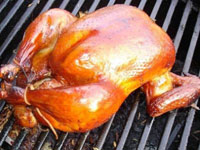 The police of Russia’s Krasnodar region arrested three women at a local supermarket for committing an odd theft. The malefactors enjoyed a grilled chicken right in the sales room and changed their shoes for the ones they liked on the shelves of the supermarket.

The three women were detained when they were leaving the supermarket. They ate the grilled chicken but did not pay for it. They also stole a number of items from the supermarket, Interfax reports. The stolen goods were evaluated at over 2,000 rubles ($66).

“We found garments of women’s underwear and hair dyes with the women. They were also wearing the trainers, which they stole from the store,” a police officer said.

Supermarket employees pressed the alarm button when the women were leaving the store.