A funny incident happened at a police checkpoint on a highway in the Russian city of Barnaul on Thursday morning. The witnesses standing at that moment in a traffic jam on the highway told journalists what happened there, Atmosfera news agency reports. 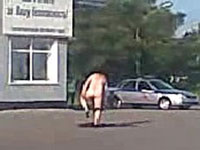 One of the witnesses said that a well-dressed respectable man approached policemen at approximately 07:45. The man was wearing trousers, a shirt and a tie. All of a sudden the man took all of his clothes, including his underwear, in front of the startled policemen.

The man seemed to have come to the check point in order to perform the eccentric act on foot – he did not have a car nearby.

He was about 35 years old and he did not look like a drunken man. The eyewitnesses supposed that the man did it for a bet that he probably had with some of his friends.

Having taken off all the clothes the naked man started chasing the policemen. The police officers turned tail and run being afraid of the nude man’s invariable behavior.

Car drivers and casual witnesses of the funny incident started filming the scene on their mobile phones. Nothing was reported about what happened further with the extravagant exhibitionist.