Three dogs, the African Boerboels, attacked a 13-year-old boy in St. Petersburg on Tuesday. An elderly woman was walking the unmuzzled dogs on long leads. The dogs nearly bit the boy’s feet off and severely mauled his head. The boy was hospitalized in hard condition, Fontanka.ru reports with reference to local TV channels. 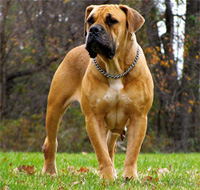 The woman tried to help the boy, covering him with her own body. She was hospitalized as well, but her life is out of danger.

Doctors say that the boy lost a lot of blood and had his internal organs damaged. It will take surgeons at least eight hours to complete the operation. If he survives, he will most likely remain a disabled person for life.

The police shot one of the dogs dead and wounded another one on the spot. The third dog ran away.

Neighbors said that the dogs were always friendly before. The incident happened because their owners left for a while and asked the elderly lady to look after them.

The Boerboel is a large working molosser breed of dog from South Africa. The dog is a heavy mastiff breed with characteristic sand coloration with a black mask, and a height that varies from 64-70 centimeters for males, and 59-65 for females. This dog is the most protective dog breed that is not aggressive. They are obedient and intelligent, and have strong territorial instincts, particularly in domestic situations. By nature, the Boerboel is confident and dominant in its environment, but requires human companionship; if left alone for regular extended periods, they can become destructive, reckless and dangerous.